PM Modi addressed the 73rd episode of the ‘Mann ki Baat’ program and the first episode of the year 2021 on Sunday. Hailing various departments and discussing many important events in the country, the prime minister also underlined the increasing participation of the country’s women in different fields. 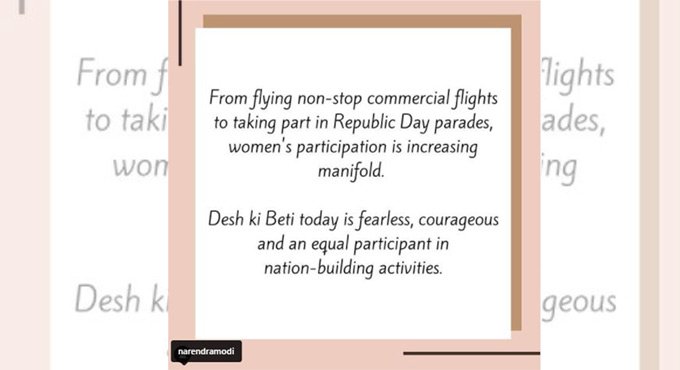 She also tagged the official Instagram account of the PM and noted,”#WomenSupportingWomen #MannKiBaat #PMOINDIA” in the caption.
The Prime Minister accentuated the historic move where Air India’s longest direct route flight with the all-women pilot team on January 11 landed at Kempegowda International Airport in Bengaluru from San Francisco, flying over the North Pole and covering a distance of about 16,000 kilometers.

Further appreciating women’s achievements, the PM said, “You must have seen two women IAF officers creating history in this year’s Republic Day parade. Be it any field, the participation of the nation’s women is continuously increasing.”

Flight Lieutenant Swati Rathore became the first woman to be part of the flypast over Rajpath as she flew a Mi-17 V5 helicopter in a formation of four choppers.