Visionary who launched icons S Sujatha K Balachander left a lasting legacy that remains a benchmark for many aspiring directors A Dadasaheb Phalke awardee and known as ‘Iyakunar Sigaram’ in Indian film industry, K Balachander is remembered not only for his women-centric films, but also for his immense contribution for introducing multiple talents who became legends in the Indian cinema.

The list comprises names such as Nagesh, Sujatha, Kamal Haasan, Rajnikanth, Chiranjeevi, Jayaprada, Sridevi, Jayasudha, Sarita, Nissar, Prakash Raj, Ramesh Aravindan and Vivek, etc. Popularly addressed as KB sir, he was discovered by the legendary MG Ramachandran. In an interview, KB revealed that MGR was a great fan of his plays and gave KB an opportunity to be a scriptwriter for the film Deiva Thai.

He started his film career in 1964 as a screenwriter and became a director with Neerkumizhi (1965). K Balachander is considered as the torchbearer for every upcoming director. One of the best comedians and versatile actor Nagesh always used to call KB Sir as ‘Balu” like a family member. Nagesh acted in the iconic role in Server Sundaram dominating the screen with his emotive skills and action which was a big hit.

In Anthuleni Katha, which starred Jayaprada in the leading role, there is a scene where the character Tilak’s mother says, “What is this? She is talking without any respect. Before marriage, she is talking arrogantly. As a retort, Jayaprada’s character Sarita says, “Before marriage a girl can be arrogant, but not pregnant.” His dialogues and movies will remain evergreen for centuries to the contemporary celluloid creators.

He was a visualiser who portrayed nitty-gritty of life and human relationships in his films. Moulee, director and scriptwriter says, “I learned discipline, hardwork, dedication from K Balachander. He always use to start every movie as if it is his first movie. He never compromised with work. I learnt these qualities from him. That is what made me a successful writer and director today.” Strict about film shooting, KB once suffered from a heart stroke during shooting. His doctor advised him to avoid stress, stop shouting and smoking.

KB followed the suggestions, but after few months, he returned to scriptwriting if not shooting. That was the level of his involvement. KB also introduced two superstars to the industry. Kamal Haasan as Pramila’s brother in Arengetram (Jeevita Rangam), which received a lot of negative feedback from people. 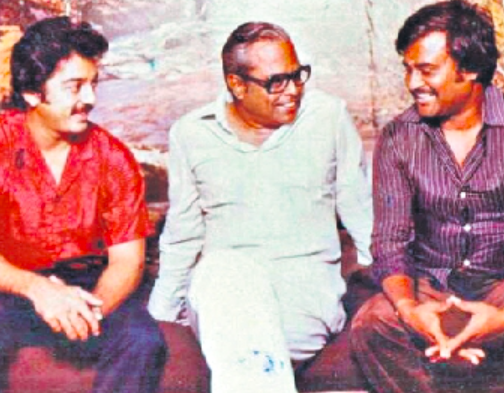 However, Kamal left his mark in the movie. Rajnikanth is also a KB discovery who acted in Apoorva Raagangal in a pivotal role in the climax. Today, KB would have turned 90, his legacy of filmography looms large when we think about his women-centric films with their unconventional bold characters.

In a 50-year long film career, K Balachander directed and scripted 100 films, 40 of which starred Kamal Haasan alone. Undoubtebly, many luminaries and great contributors are there,who have contributed to the growth and development of south Indian cinema, but there is only one Sun, only one moon for the Earth and that is K Balachander. box item