Radha Dhaka’s story about how she ventured into cake-making will sound familiar to many. What started as baking for family and friends led to a very successful business; however, that’s where the parallel ends.

Her brand ‘Le Petite Meringue’ which simply means ‘little sugar cookies’ in French is a tip-off to her days teaching everything about the French language in her turn as a French professor. Only later, sugar pastes, fondants, food colours and cakes began to draw her interest away and soon turned into a passion that grew as the years went by.

The year 2010 was a turning point for her as she established her brand and word of her skill with exquisite cakes, macaroons, cookies, madeleines and different types of brownies spread like wildfire. “It was all trial and error initially. I am self-taught and didn’t take any coaching on cake-making. Slowly, I developed recipes and began to really experiment with the cakes,” says Radha.

Operating out of her home in Gachibowli, her days are filled with taking orders for weddings, birthdays, anniversaries, special occasions and teaching the basics of cake-making to her students. Her speciality is gravity-defying cakes and figurines of people.

“Such cakes are planned much in advance and the concept is the result of a lot of back and forth between the client and me. Typically, the time to make them varies depending on the concept. It takes at least a week or more to make the cake,” explains Radha who also teaches figurine-making to her students.

Her repertoire has garnered the attention of cake-making enthusiasts from other cities and countries too. Currently, she has a student from Bangladesh who is learning the basics of fondant making from her.

Her ingredients are all locally sourced. According to her, the profusion of numerous cake-makers has also led to a good demand for the ingredients which are now available in the city. “Previously, getting good quality vanilla extract meant asking someone going abroad. Now, it’s pretty easy to get here,” adds Radha who has observed that with more exposure, people are also opening up to new concepts in cakes.

“Indians, for a long time, were used to bakery items. The bakeries used sugar syrup copiously, so the cakes would become soggy and people thought that’s how a cake should be. It used to be a lot of struggle to make a client understand that a fondant cake would taste just as delicious,” says Radha who is a sculptor as well. 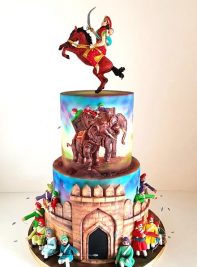 She also happens to be the brand ambassador of a range of food colours. With a finishing school in the pipeline and orders for cakes coming in, Radha has her hands full, both literally and figuratively.