Hyderabad: Continuing the good run in the IT sector, Telangana State’s IT/ ITES exports registered an impressive 16.89 per cent growth year-on-year during 2018-19 compared to expected national average of around 8-10 per cent. The IT sector generated a direct employment to 5.43 lakh people with 67,725 new professionals joining the workforce last year. Total investments into IT/ ITES sector last year stood at Rs 23,054.02 crore.

“The State is steadily going forward on the path it designed to achieve the target of doubling the IT/ITeS exports. We have has almost achieved the ambitious target set five years back with a 190 per cent increase. Like in the previous four years, we have continued to outperform the expected nation’s IT/ITeS growth rate (YoY),” said Jayesh Ranjan, Principal Secretary, Information Technology, Electronics and Communications (ITE&C) department.

The IT department released its fifth successive annual report on Saturday as part of State Formation Day celebrations.

Ranjan said the IT department has handled engagements with several companies and encouraged them to setup campuses in Telangana with a vision to reach 10 lakh headcount of IT employees very soon. 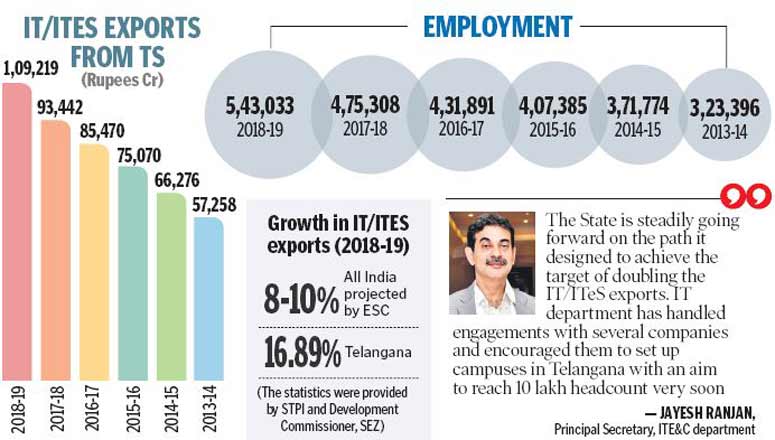 T-Hub, T-Works
All organizations, wings created over the past few years such as T-Hub, TASK, T-SAT, T-Fiber, State Innovation Cell (TSIC) have continued to excel and beat the expectations, he said adding that T-Hub continues to enable and empower an ecosystem hungry for innovation. It leads India’s pioneering innovation ecosystem that powers next-generation products and new business models. T-Works, India’s largest prototyping centre for electronics, electromechanical and mechanical startups, is coming up in 78,000 sqft facility with over 200 machines across 11 sections.

T-SAT, the Government satellite TV network, has telecast 4,612 episodes of different programmes and has crossed 3 lakh subscribers mark on YouTube. Its programmes received 2.39 crore views with a watch time of 26.5 crore minutes. Assam IT Minister and a team of Tamilnadu’s Education Dept have visited T-SAT for studying the initiative and possible replication.

Telangana State Innovation Cell (TSIC) initiated ‘Startup India Telangana Yatra’ with an attempt to promote entrepreneurship in Tier II and Tier III cities of the State. The programme took place in 12 districts where 624 ideas were pitched and 201 ideas were selected for the finals, the annual report said.

In line with the spirit of Digital Telangana, Electronic Service Delivery (ESD), the nodal agency that provides citizen centric government services through MeeSeva and eSeva platforms, has rolled out MeeSeva 2.0. Telangana continues to hold the pole position amongst the States in the number of e-transactions per thousand population.

ESD had taken up initiatives like Real-time Digital Authentication of Identity (RTDAI) and Pensioner’s Life Certification through Selfie (PLCS). The Telangana Government has created a new vertical for emerging technologies with the two-fold objective of developing the ecosystem for the industry and to make the government departments to leverage and adopt the new technological disruptions. It is also encouraging various departments to adopt artificial intelligence, machine learning and big data.

The T App Folio, the integrated mobile app that offers a single platform for all the G2C services, has clocked more one lakh downloads in the last one year. It is being integrated with mobile apps of other departments such as myGHMC, RTA m-Wallet, HawkEye and others.

AePS
The State had introduced Aadhar enabled Payment System (AePS) in July last year allowing citizens to withdraw cash from MeeSeva Centres using biometrics. This is proving to be of great importance in rural areas where bank branches and ATMs have limited presence.

Ranjan also announced the official setting up of T-SIG (Telangana Social Impact Group), which would play a pivotal role in remodeling corporate social responsibility in the State.

This year, T Hub and State Innovation Cell have carried out several initiatives to encourage and support innovation and entrepreneurship ecosystem across the State. WEHub, India’s first State-led incubator exclusively for women, also took shape in March this year. About 245 applications were received for its incubation programme and 26 were selected .

TASK
Other wings such as TASK and T-SAT are growing from strength-to-strength to set up the human capital required to make Telangana as the go-to destination for any IT organisation. T-Fiber works are being carried out at a rapid pace and they had established an edutainment centre – India’s First Rural Entertainment and Education Zone in conjunction with Telangana Academy of Skill and Knowledge (TASK). Nearly three lakh youth have been trained across Telangana since its inception. The IT department of the State has been supporting government departments to adopt IoT, Blockchain, drones, AI & ML and other technologies, which had resulted in fruitful outcomes, the official said.

ESDM
The Government has set an ambitious target of crossing Rs 6000 crore investment in Electronics System Design Manufacturing (ESDM) ecosystem by 2019 and is moving towards achieving it by attracting investments into the two of its ESDM clusters at E-city and Maheshwaram, with more than 912 acre notified land.

The IT department has won several awards during the last one year including Digital India Award 2018 for T App Folio, CSI e-Governance Award for T Wallet, Higher Education Council Award for TASK’s Skills on Wheels.