The beautiful thespian Lushin Dubey, who also happens to be a teacher and painter, has an endearing elegance about her that doesn’t fail to impress. She is known for plays like Untitled and Bitter Chocolate (based on Pinki Virani’s book), which were directed and scripted by Arvind Gaur. Talent, one could say runs in her family. She is the younger sister of actor Lillete Dubey, herself an established star in both the theatre and film world.

A renowned theatre personality in the country, Lushin tells us about her progressive family, her debut in theatre, religion and viewpoints in a freewheeling chat.

As a child, Lushin remembers growing up on a steady diet of music, dance and theatre shows. “My father was a versatile man and he always taught us that we must partake in everything life has to offer,” says Lushin, adding, “I am thankful for all the exposure we got at a very young age. We were even trained in classical music for five-six years.” On the other hand, she describes her mother as being a down-to-earth strong woman who taught them that no challenge was too hard to overcome.

Her father, Govind Kiswani is a former physicist-cum-engineer, while her mother Leela used to work as a gynaecologist in the army. Lushin also has a younger brother, who often behaves like her elder brother. The family is a close-knit one and remains protective of each other even now. 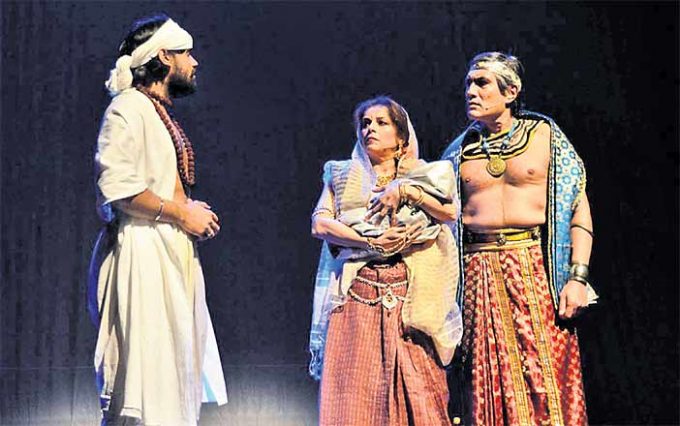 As a child, Lushin was a quiet girl who spent most of her time sketching and playing the tabla. The artistic inclination was always there even as a kid which was nurtured as she grew up. She won her first international award in theatre when she was in the fourth standard. At the age of 13, she joined Barry John’s theatre group in Delhi kickstarting her journey in the theatre world. After completing her master’s in history, she married Pradeep Dubey and shifted to USA.

After a few years living abroad, Lushin wanted to come back to her roots. So, the couple decided to divide the months in a year between the two countries. “It was Pradeep who came up with this ‘half-time deal’. I came back to India and started a children’s theatre group along with Bubbles Sabharwal called the Kids World,” she says. “I had always wanted to work with children and we are actually doing a good job,” she adds. Simultaneously, she started working on her solo plays with Indian theatre director Arvind Gaur known for his contemporary works. “I also started producing, directing and came out with my original plays like Life of Gautama Buddha and Salaam India,” she says.

Lushin’s plays are known for highlighting social issues like communalism, HIV, child sexual violence and violation against women. “After doing a lot of Shakespeare and regular plays, I have shifted to working on complete originals focusing more on contemporary subject based production,” she adds.

Quiz her on what career she would have chosen, had it not been for theatre? She is quick to reply that she would be a painter. When she is not acting or painting, she likes to read and write. She has also written a children’s book titled Gandhi. While she has appeared in Bollywood films like Partition, Delhi Belly, and Murder Unveiled for which she won the Gemini Award 2006, Bollywood is not really her focus at the moment. “I haven’t pursued Bollywood actively, whatever roles I played came my way on its own and I am content with that,” she says.

Lushin describes her encounter with Buddhism as a life-changing one. She was introduced to the religion in 2005 and practices Buddhism now.

Describing it as an empowering experience, she shares a few mantras she swears by in life. “As long as my knees and senses are fine, I will go on no matter how old I am,” says Lushin. She then says that compassion and giving are simple things that give a lot of joy.