Hyderabad: In a stern warning to China, Union Defence Minister Rajnath Singh has said the new India is not weak and can give a befitting response to any transgressions, aggressions and unilateral actions on the border.

Addressing the Combined Graduation Parade at the Air Force Academy in Dundigal here on Saturday, Rajnath said the transgression by China even during the Covid-19 pandemic showed the neighbouring country’s intentions. India, however, believed in resolving any dispute in a peaceful manner and through dialogue. With several rounds of talks held through diplomatic and military channels to resolve the issue, India had made it clear that it did not want any discord but only peace.

“At the same time, we will not tolerate any hurt to the self-respect of the country, and if that happens, we are fully prepared to give a strong response,” he said.

Though Pakistan had lost four wars against India, the neighbouring country was still waging a proxy war through terrorism against India, the Defence Minister said, adding that the armed forces and the police were dealing with terrorism not only inside the country but also across the border. Citing the airstrikes on terror launch pads in Balakote in Pakistan, he said the attack demonstrated the strength of India’s armed forces to the world and the country’s firm stance against terrorism.

Later, the Minister said warfare was changing and there was a need to adapt to the changes. The country faced challenges not just on land and sea but also from space and cyber domains as well, he said, adding that future defence strategies would, therefore, have to be prepared accordingly.

Rajnath also said talks on the combined air defence and maritime command were in an advanced stage, adding that this would help the armed forces work in an integrated and comprehensive manner.

He, reviewing the passing out parade, congratulated the 114 cadets, including from Vietnam and Nigeria, who graduated from the AFA. He advised them to update themselves constantly.
“For future warfare and betterment, it is necessary that there should also be a scholar within you besides a soldier. You, therefore, have to update your knowledge on technology and military strategies and also focus on artificial intelligence,” he said. 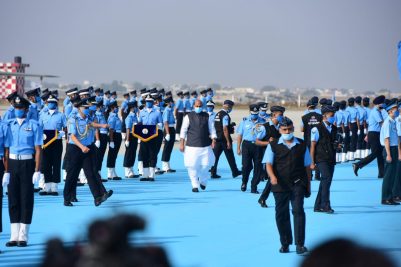