Hyderabad: As the introspection game goes on in the aftermath of Hyderabad’s dreadful Ranji Trophy season, a mere glance of the batsmen’s and bowlers’ statistics would sum up the shameful show.

There were only two centuries (Kolla Sumanth’s 111 and Tanmay Agarwal’s 103) while there was not a single five-wicket haul in the entire season. The best bowling figures came from fast bowler M Ravi Kiran (4 for 39). There was only one century partnership of 131 for the fifth wicket between Himalaya Agarwal and Sumanth, who is incidentally the top run-getter of the team with a total of 448 runs from eight matches.

That is the abysmal standard of Hyderabad cricket in Ranji Trophy now. It was no surprise they ended up 18th and last in the Group A & B table. They have since been relegated to Group C. Gone are the days when Hyderabad had record highest run getter in VVS Laxman, who accumulated 1,415 runs in 1999-2000 season with an average of 108 from nine matches (nine 100s, including one triple century). The players played with passion, dedication and discipline.

Having a rich legacy of astounding batsmen and bowlers, Hyderabad has now hit a new low. One would shred to see this pathetic show by the batsmen and the bowlers alike. Whom to blame? Is it the coaching staff of Arjun Yadav, Shashank Nag, NP Singh and NS Ganesh (who was included in the last few matches as one of the poll promise) or the players? Surely, the lack of application and discipline among the senior players saw the team crashing to a mind-boggling six defeats from eight matches. The inability of the coaching staff to motivate or bring seriousness in the game was also a big factor.

If Bharat Arun and Badrinath as coach and captain could take the team to the quarterfinals in 2016, the team’s fortunes started slipping from 2018-19 season and reached its nadir this season. Is there any accountability for the coaching staff or to the selectors? The Hyderabad Cricket Association (HCA) should add ‘accountability’ clause in the new contracts of the coaching staff and the selectors. By the way, there is no word on West Indies legend Curtly Ambrose’s coming as consultant. It may be noted that HCA president Mohd Azharuddin spoken of utilising the services of the West Indies fast bowler a few months ago. 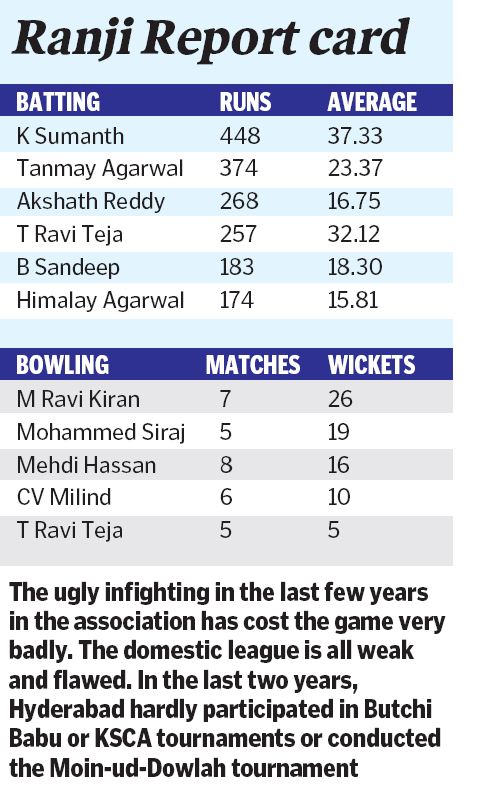 If one notices the performances of the senior players, they are lucky enough to play the entire season with near zero contributions. It hurt the team very badly. RA Swaroop, chairman of selectors, repeatedly said there was no talent in the junior ranks and hence they were forced to continue with senior players. But given a chance, for example, young players like Buddhi Rahul, Prateek Reddy and Aniketh Reddy outperformed the seniors. The left-handed Prateek was the top scorer with 83 in his debut match while left-arm spinner Aniketh returned with four wickets in his first match.

The ugly infighting in the last few years in the association has cost the game very badly. The domestic league is all weak and flawed. In the last two years, Hyderabad hardly participated in Butchi Babu or KSCA tournaments or conducted the Moin-ud-Dowlah tournament. It was a good pre-season preparation before the start of the new season.

Now that the damage has been done, the immediate priority is to restructure the entire league system. Having 19 to 20 teams in three-day league never helps a player as the standard is too low. It is the clubs who have benefited in this new structure. In the past there were ten teams and there was tremendous competition. In fact, a player had to struggle before playing the three-day league. The system has become corrupt, according to reports, and as a result it is an easy picking for any player to play in three-day league. This has to be stopped. Today if Karnataka is doing well it is because of a solid and strong system. They are champions in Vijay Hazare one-day tournament and T20 Mushtaq Ali tournament. They look set to win the Ranji Trophy. Andhra has also impressive show in all the categories, including women, this season. They qualified to the quarterfinals in Ranji Trophy. They have good number of academies and grounds in most of the districts and it is because of proper utilisation of BCCI funds unlike HCA which glorifies with one stadium at Uppal that too with blown off canopies.

The HCA should revamp like the Karnataka model. There onus is on HCA take up the challenge. They should start the academy immediately at Gymkhana and pick a select group of players for sustained training programme. Last of all, they should set aside the dangerous vote-bank policy in the interest of the game otherwise cricket in Hyderabad could face a bleak future.