Hyderabad: Chameli Nadella may be just 25 years old, but she already boasts of 55k followers on Instagram and 113k subscribers on YouTube. For what, you may ask? She is a well-known rider and a moto vlogger based out of Hyderabad. The motorcycle that she currently owns is Royal Enfield Classic 350 cc Gunmetal Grey that has been part of her journey from the beginning.

Her recent ride to Ladakh from Hyderabad earned her quite the fan following on social media and in real life. Chameli became the first female rider from South India to ride through the Atal Tunnel.

Riding in Ladakh during winter in drastic climatic conditions of -15 degree and -20 degree was a thrilling experience for the youngster. “My first ever two-wheeler experience was when I rode my grandfather’s TVS. It’s still a memorable moment for me riding in my village among the paddy fields. I used to always love traveling since my childhood days,” says the rider, who has roots from Bellary in Karnataka.

Chameli, who recently completed her MBA from IBS, Hyderabad, is also working as an independent stock market trader and investor. “I knew how to drive a car, so learning a bike on my own was easy. When I first rode a Royal Enfield I didn’t like how noisy it was, but I eventually fell in love with it. My dream is to own a Triumph bike in the future,” adds Chameli who also did a solo ride from Hyderabad to Kanyakumari in the recent times. 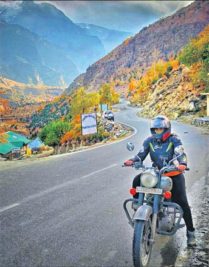 She says that riders need to know their limit and try not to overexert themselves when doing long rides. She also feels that one must invest a good deal in safety equipment apart from investing in luxury bikes.

“The main challenge for me was to convince my parents – it took me almost three to four years. Initially, they didn’t even know that doing long rides on a bike was a culture. And when they got to know that their daughter was into it, it took them some time to get convinced. They’ve not been completely unsupportive, but they were concerned for my safety,” shares Chameli.

Talking about a memorable experience from her Ladakh trip, she says, “To reach Leh from Ladakh was a task as there were several high passes at some 16,000-17,000 feet. For every 10km, I was holding my bike’s silencer as the climate was so harsh and I was beginning to lose my sensation. My accommodations were not confirmed and there was no petrol bunk nearby, and that’s when I found a small shop where a woman was selling Maggie. She was so friendly and spending 10 mins with her motivated me to go on with my ride.” On a parting note, Chameli wants to thank her sister for encouraging her despite all the odds.