Saying, Thota Vaikuntam, is a local artist with a global reach wouldn’t be far fetched. His work reflects images of rural Telangana in vibrant colours. Born in Boorugupalli village near Vemulawada in Karimnagar district, Vaikuntam’s journey through art is not without struggles and challenges. Bored of studies, and interested in painting, he liked drawing calendars and cinema posters, while his parents wanted him to become something in the electrical field – a linesman or something similar.

Like most parents of his time, Vaikuntam’s father also discouraged his desire to pursue a career in art because there was no money in it. Even in his art career, Vaikuntam recollects how his teachers asked him to learn photography or do commercial art, but he stubbornly refused to change and stuck through many difficult times.  He encourages the parents of the current generation to listen to, and promote, their kids’ interests and passion for art, irrespective of the commercial value of their chosen careers.

Vaikuntam, the person, is as simple as the artist’s work is sophisticated. He recollects how it took him nearly 20 years to figure out what art is.  “I haven’t read the Indian school of painting but any part of India has a rich tradition of arts and crafts”, he says. 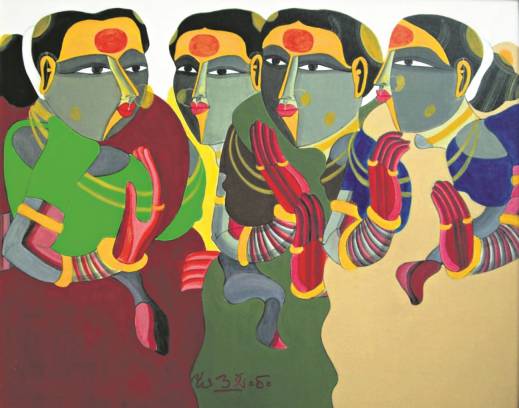 Back in his native village, to take care of his mother, Vaikuntam remembers connecting with his own cultural roots, and credits the village as his guru, in addition to his other teachers from college.

Vaikuntam reminisces that his village was culturally rich and ahead of the times. He remembers growing up watching the village dramas and street performances, from the Mahabharata, by the village priests, and listening to the songs that the farmers used to sing. Maa vooru appudu kuda telivikallade (My village was intelligent even at that time), he says.

While he acquired his knowledge about composition from college, he credits taking his colours from his village – blue, red, green, yellow and nowadays, half white.  As the artist says, nativity is important in one’s art. “Nenu eioorununcho aa Ooru naadhi (I am what my village is). “What comes from ‘outer space is not just art, inner space ‘nunchi vachedi’ (what comes from within) is art, and you have to learn that yourselves”.  “Art and craft comes from your culture – local culture, local surroundings, local ethos nunche (from within)”, he says.

Vaikuntam still remembers how an American in Baroda had critiqued that most Indians copy either Picasso or Matisse. Though art is mimetic, as Aristotle said, for him art is about capturing the beauty of his village life. It resonates with others in its ability to reproduce a state of life that has nostalgic value – for those who have left it behind, and for those who imagine being there.

While there is more to every piece of art, in Vaikuntam’s paintings, the added value is also due to a reflection of the rural past that was left behind. Something that could only be recollected, recaptured and represented, especially for the Telugu diaspora, through displaying his figurative paintings of rural men and women on their walls.

So, what is it that appeals to someone in Vaikuntam’s art? Is it the stylised, exaggerated images of men and women showcasing life in pristine villages of Telangana? Is it a reflection of the romantic ideal of rural life? Is it the strong lines, painted and filled with solid mismatched colours that create a positive sense of nostalgia in the viewers? Absolutely. It is all that and more that lends a distinctive touch to Vaikuntam’s artwork – but overall it is the strong doses of colour – turmeric, or vermilion, topped off by the green parrot that one has come to expect in each of his paintings.

(The author is a professor of communication at the University of Hartford, USA and an independent filmmaker)