Hyderabad: Hyderabad, which has been consistently showing growth patterns in the office space is fast catching up in the residential segment now. The city has added 5,550 units in Q2 2018 (April-June), a quarterly increase of 109 per cent, making it the second top city in the country in terms of percentage growth, following Pune which registered 214 per cent with the launch of 6,900 units.

The city has garnered visibility on the Indian real estate map with its high liveability index compared to many other cities. 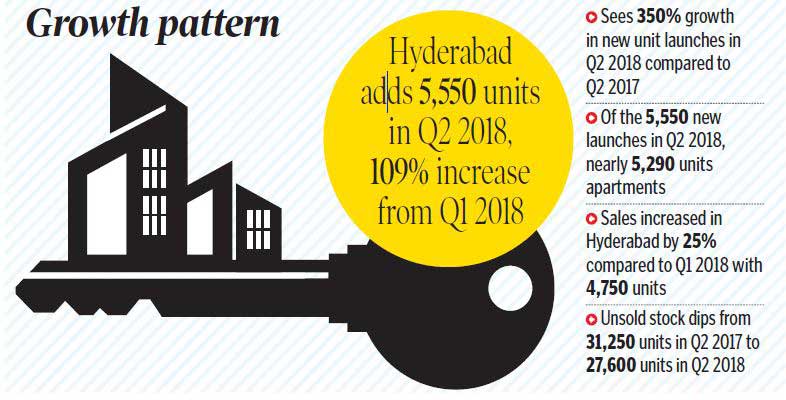 The housing launches only include projects that have been newly launched across the cities in the particular time period and it doesn’t include the completed inventory.

Sharing what keeps Hyderabad on top, Anuj Puri, chairman, Anarock Property Consultants, told Telangana Today, “Competitive property prices, increased office leasing activity and robust infrastructure growth over the years have positioned Hyderabad as one of the most active residential markets in recent times. In retrospect, supportive government policies and strong political stability post bifurcation of the State in 2014 have worked in favour of this once-slow real estate market.”

As per Anarock data, there has been more than 350 per cent growth in the number of new unit launches in Q2 2018 in the city as against the corresponding quarter in 2017, while housing sales has gone up by 16 per cent over the same period. Data further indicates that the number of unsold stock has declined from 31,250 units in Q2 2017 to nearly 27,600 units in Q2 2018.

He explained, “As per our data, out of the total 5,550 new launches in Hyderabad in Q2 2018, nearly 5,290 units were apartments while the remaining were villas/independent houses. Further, out of total 50,100 new units launched in Q2 2018 across the top seven cities, nearly 49,900 units were apartments and the remaining were villas / independent houses. This clearly indicates that apartments are the most preferred property-type in the country.”

When asked about the growth drivers nationally, Anuj Puri said, “The 50 per cent increase in new supply was dominated largely by the affordable segment, recording 100 per cent jump as against the preceding quarter. Out of the total new supply, affordable housing (less than Rs 40 lakh) comprised of nearly 46 per cent new units. From according ‘infrastructure status’ to offering sops for MIG-I and MIG-II homebuyers under Pradhan Mantri Awas Yojana (PMAY), the government’s constant push for this segment is finally beginning to bear the fruits.”

Sales in Hyderabad increased by 25 per cent over Q1 2018 with 4,750 units. Housing sales across top seven cities also rose by 24 per cent compared to Q1 2018, indicating that hitherto abstaining home buyers are back on the market. Developers are working hard on clearing unsold inventory with attractive schemes, freebies and discounts.

In terms of housing sales during Q2 2018, the seven cities together witnessed an increase of 24 per cent over the previous quarter.

Residential property prices across the top cities increased by one per cent in Q2 2018 compared to the previous quarter, barring Chennai and Kolkata (where prices remained stagnant). The market continued to be dominated by the affordable and mid-range segments.

About 77 per cent (38,600 units) of unit launches were in the price category of less than Rs 80 lakh. The affordable segment accounted for a whopping 46 per cent share of the total new launches.