It is no surprise now in an age of demagoguery that we encounter ideas of purity, perfectibility and role models drawn from one set of cultural texts alone. The endorsement of one isolated strand of thought from history as embodying what is ‘the best that has been thought and said’ (as the Victorian critic-poet Matthew Arnold put it) to the exclusion of all else, to make truth claims of one intellectual, historical and theological tradition by negating others, and to argue a case that a nation, or peoples’, future can only be designed from that one tradition is now a commonplace.

The projection of a set of peoples and their ethnicity/religious identity as providing the role model for the world, to serve as a teacher for the world, whose ideas about the family, women or community as universally applicable instantiates a cultural arrogance of an unparalleled scale, and often relies on foundational texts. For such texts, it is enough to scream truth claims: evidence is not required and personal opinion masquerades as expertise.

As we continue, globally, on this path of demagoguery, it is insightful to return to a text in which similar myths and ideas of ethnicity, identity, nationhood and the human form were enunciated. That text institutionalised state-sponsored discrimination and genocide and, at the risk of valorising a notorious text, must be dipped into for us to recognise the anterior moments of today’s rhetoric.

The text came out of one man’s experience with a nation’s humiliation, and set the tone for political policy-making: Adolf Hitler’s Mein Kampf (1939), described by the professor of literature, Albrecht Koschorke, in On Hitler’s Mein Kampf: The Poetics of National Socialism (2017) as the ‘first dictatorial book of the twentieth century’. 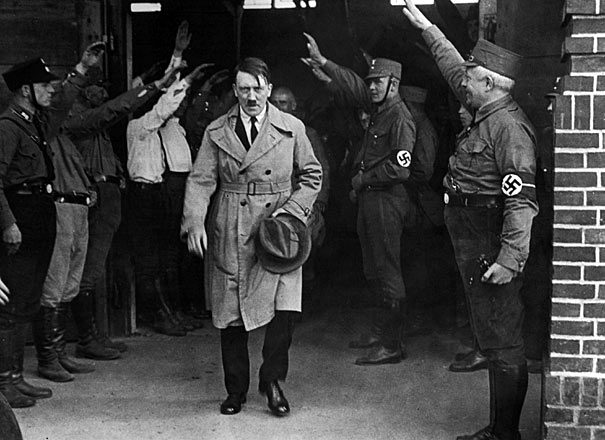 Hitler’s obsession with not only the purity of the races but also of the role of the reproduction of perfect Aryan bodies borders on the pathological. In determining the future of Aryan procreation, linking this with national destiny, Hitler writes:

“For as soon as procreation as such is limited and the number of births diminished, the natural struggle for existence which leaves only the strongest and healthiest alive is obviously replaced by the obvious desire to ‘save’ even the weakest and most sickly at any price, and this plants the seed of a future generation which must inevitably grow more and more deplorable the longer this mockery of Nature and her will continues … A stronger race will drive out the weak…”

That is a eugenics approach to human reproduction, where only those determined as ‘the strongest and healthiest’ should be allowed to breed.

For Hitler, the Aryan race must follow this model of the procreation of the best because only this race could be ‘the founder of all higher humanity… representing the prototype of all that we understand by the word “man”’. The Aryan race, carefully encultured into reproduction, would produce a healthy nation: “Only when a nation is healthy in all its members, in body and soul, can every man’s joy in belonging to it rightfully be magnified to that high sentiment which we designate as national pride.”

Ranting against ‘impure’ marriages – interfaith, interracial, as we see even today – Hitler calls for altering the role of marriage: “from the level of a continuous defilement of the race, and give it the consecration of an institution which is called upon to produce images of the Lord and not monstrosities halfway between man and ape.”

The “defilement of the perfect race through miscegenation has to be avoided at all costs”, and hence the policing of interracial, interethnic liaisons and marriages, as advocated by Mein Kampf.

Hitler claimed, falsely, as Brigitte Hamann demonstrates in Hitler’s Vienna: A Dictator’s Apprenticeship, cited by Koschorke, that he undertook hard physical labour in Vienna in his youth, as a way to ‘prove’ the need for a fit body. He stated: “[I]f the mass of a people consists of physical degenerates, a really great spirit will very seldom arise.”

Such ideas need to be inculcated from an early stage, and serving this purpose was education. Hitler wrote: “Thus, the whole system of education must be organised as to use the boy’s free time for the useful training of his body.”

Fitness regimes are mandatory for boys: “Those boys whose constitutions have been trained and hardened by sports and gymnastics are less prone to sexual indulgence than those stay-at-homes who have been fed exclusively with mental pabulum.”

And what of girls and women? Hitler had his answer ready: “the woman must be culturally trained into a ‘future mother’.”

In fact, Hitler’s account of a people that bow to a supposed ‘strong’ (masculine) leader is cast as a terribly gendered analogy: “The psyche of the broad masses is accessible only to what is strong and uncompromising. Like a woman whose inner sensibilities are not so much under the sway of abstract reasoning but are always subject to the influence of a vague emotional longing for the strength that completes her being, and who would rather bow to the strong man than dominate the weakling – in like manner the masses of the people prefer the ruler to the suppliant.”

It is important to examine these texts critically for how they shaped the social imaginaries of nations, and which helped justify the campaign against peoples.

History is shaped in and through such texts.