Come April, the streets of Ameerpet will come alive with the sounds of nagar keertans, prabhat pheris in the wee hours of the morning, and a fascinating display of gatka by Sikh youngsters. Thousands of Sikhs will come together for the festival of Vaisakhi at the Gurudwara Sahib in Ameerpet which celebrates it on a large scale.

This year, Vaisakhi falls on April 14 and the office of the Prabhandhak Committee of Ameerpet Gurudwara is abuzz with activity. There is constant ebb and flow of people as its president, Sardar Bhagender Singh tells us about the history of the Sikh community, and how they came to Hyderabad during the Nizam’s time. The story goes that, around 1832 AD, the Nizam of Hyderabad was facing trouble from Jagirdars who were not paying revenue.  Upon the advice of his Prime Minister, Chandulal, he wrote to Maharaja Ranjeet Singh, governing the North-West province for help. “Along with the letter, the Nizam also sent a beautiful canopy (chandni) embedded with precious stones, gems and diamonds to the king,” explains Bhagender Singh.

Their ordinance was — “It is the duty of the Sikhs to give protection to anyone, who comes for protection.” The soldier’s wages were to be paid by the Punjab treasury.  The forces carrying the 14 Nishans (holy flags) were placed at the Sikh Chawniat, Attapur, and the place came to be called Barambala. “Later, the Sikh forces were absorbed into the City Police. Most members of the community are self-employed now and run small-time businesses, factories or work in the IT industry or part of the defence forces,” adds Bhagender Singh.

Today, the Sikh Chawni is known as Maharaja Ranjeet Singh Nagar which is home to some 1,200 Sikh families.  Tucked away in a quiet lane of the area is the historic Gurudwara Sahib Barambala constructed in Kishanbagh in 1832 AD.

Recently, a new gurudwara, said to be the largest in the State, was inaugurated in January, next to the almost 150-year-old gurudwara.  At a time, it can seat some 5,000 to 6,000 devotees at its langar hall. One interesting aspect of this place is old religious texts, marriage invitations with Gurubani are cremated here.

“Old and damaged copies of the Holy Book, Guru Granth Sahib, are given a ritualistic cremation at the Guru Granth Bhavan known as Angeetha Sahib. We do this for two days once in a year,” says Harbans Singh, chairman, Sikh Chawniat, whose family lineage goes back to the Risala force.

Philanthropy is ingrained in the Sikh community for whom seva and simran (service and meditation) are sacrosanct. A monotheistic religion founded by Guru Nanak Dev around the 15th century, the word Sikh originates from the Sanskrit word, ‘shishya’ meaning disciple. Sikhism is based on the spiritual teachings of Guru Nanak and the nine Sikh Gurus who succeeded him. “The tenth guru, Guru Gobind Singh, named the holy scripture, Guru Granth Sahib as his successor ending the line of human gurus. The scripture is the eternal religious and spiritual guide for Sikhs and is considered a living Guru,” says Gyani Jagdev Singh, head granthi, Gurudwara Sahib, Secunderabad.

In service to humanity

During the Mughal conquest, the Kashmiri Pandits went to the ninth Guru, Tegh Bahadur, to safeguard the Hindu community from forcible conversion. “Guru Tegh Bahadur said, ‘If they can convert me from Sikhism, then the entire community will convert. He went to the Red Fort, where he was martyred. The forcible conversion stopped then,” says Bhagender Singh.  Subsequently, Guru Gobind Singh called a congregation and told them that he wanted a community distinctive from others and asked for volunteers willing to give their heads. The five volunteers who sacrificed themselves and were reborn were called Panj Pyaare.

It led to the formation of the ‘Khalsa’ (pure) and a code of conduct for Sikhs.  The code being they keep five items —kesh (uncut hair), kangha (comb), kada (steel bracelet), kirpan (a small dagger) and kacchera (shorts) on their person at all time.  “They are also prohibited from cutting their hair, consuming Halal meat, committing adultery, and consuming tobacco and liquor,” explains Sardar Harbans Singh of Sikh Chawniat.

Generally, most Punjabi families go by the name Singh, but in actuality they should take the name only after being initiated into the faith in a ceremony called Amrit Sanchar or Khande di Pahul. “There is no timeline as to when it should be done.  The child must understand the significance of the rite and be able to take care of the five items. It must be done at least before they marry. The initiated people are known as Amritdhari Sikhs,” says Sardar Bhagender Singh.  After this, the men take the name ‘Singh’, while the women take ‘Kaur’.

A truly secular book, the Guru Granth Sahib is a unique amalgamation of compositions of not only the Sikh Gurus but also of saints such as Ravidas, Ramananda and Kabir. Written in the Gurumukhi script, the first scripture called Adi Granth was prepared by Guru Arjan, the fifth Sikh Guru. It later expanded into the Guru Granth Sahib. The compositions, called Gurbani, (Guru’s own words) are devotional hymns and prayers to the God, and propagate message of love, truth, humility, brotherhood, equality, service to others and purity of mind and soul. The hymns numbering 3,384 spread over 1,430 pages are arranged under different ragas known as shabad kirtan which are sung by ragi jathas (person who sings the hymns).

The Sikh community is a sizeable one in the city, so it’s a given that the festivals are also going to be equally grand in scale. A number of gurudwaras dot the city landscape, but those who hold a prominent position are the — Gurudwara Sahib, Barambala; Gurudwara Sahib, Secunderabad; Sri Guru Singh Sabha, Afzalganj; Central Gurudwara, Gowliguda; and Gurudwara Sahib, Ameerpet.

Traditionally, celebrations of any festival were observed by spending quality time with close relatives and friends at local gurudwara with shabad kirtans playing in the background. But, over the years, with influx of more and more Sikhs in the city, centralised celebrations of Vaisakhi, Guru Purab, Prakash Utsav,  etc; have become a norm. To avoid a clash and through mutual understanding, each of these gurudwaras celebrate one festival on a large scale with the others observing it on a smaller level.

For instance, Vaisakhi, also known as the Khalsa Foundation Day, is celebrated by the Ameerpet Gurudwara with great fervour where ragi jathas and speakers from other cities are invited. 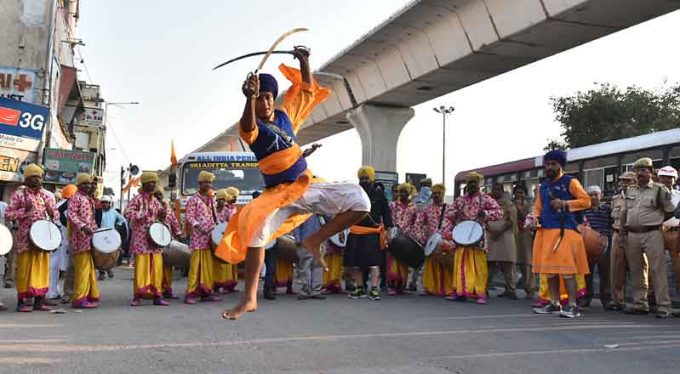 Helping others through small acts of kindness like making sure the underprivileged get access to education, healthcare, and monetary support to widows is managed by the Prabhandhak Committee of the gurudwaras.  The larger gurudwaras like those at Ameerpet and Secunderabad provide well-equipped rooms at nominal rates of Rs 300 and Rs 600, respectively, to anyone who is either in the city for work or medical reasons.

“Many parents of girls who come to the city for work stay here since they feel very secure. They stay till they find a permanent place. We also give accommodation for two months in exceptional cases. Many needy people who are relatives of patients at nearby hospitals also stay here,” states Baldev Singh Bagga who also serves as the chairman of the Guru Nanak Medical Centre near the Secunderabad Railway Station. The polyclinic and diagnostic centre provides free medical treatment to the needy from all communities. A similar clinic is being planned near the Ameerpet Gurudwara premises now.

“Over 36 patients come here for dialysis daily. Most of the patients get to know about the centre through word of mouth. We also provide free annual checkup for senior citizens twice a year,” adds Baldev Singh Bagga whose wife Jasbeer Kaur serves as the chairperson of the ladies wing of the gurudwara. Their son Dilpreet Singh owns the well-known Hotel Royal Reve in Secunderabad.

Match made in heaven

While arranged marriages are the norm in the community, these days, parents are also taking due note of their children’s wishes. A Sikh wedding is a simple affair, which begins with roka that happens a few days prior to the engagement ceremony, where parents of both bride and groom give their consent. Following a few more rituals near the wedding day, the groom’s family visits the bride’s side for the chunni chadana ceremony where they give the bride her wedding dress, jewellery, etc. Other ceremonies similar to a Hindu one are the vatnaa which is like the haldi ceremony. 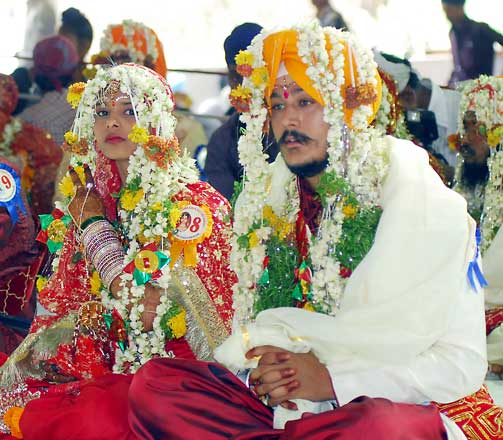 Synonymous with the Sikh bride is the chooda, a set of 21 red-and-white bangles gifted to her by her maternal uncle. She also wears umbrella-shaped metallic ornaments called kalire attached to her bangles. “It is believed that if the kalire fall on the head of an unmarried girl, she will be the next person to get married,” adds Dr Meeta. After ceremonies such as Sehra bandi, milni, the actual wedding ceremony called Anand Karaj takes place at the gurudwara. The bride and groom sit side by side facing the Guru Granth Sahib, during which ardaas is offered by singing shabads. The granthi recites the four lavaa or stanzas from the book, and the couple slowly walks around the book clockwise after completion of first stanza, the same ritual is followed for the next three stanzas which are called lavaa pheras.

Since many of the Sikh forces settled here, many married local girls leading to an intermingling of traditions and food. While the Dakhni Sikhs follow the same rituals and traditions as the Sikhs who came here later, the staple food in their households is a tad different. “Usually, roti is a staple but they also eat rice, there is a lot of Maa chole ki dal and tur dal in the diet. Chole bhature and paneer are also used extensively in dishes. These days, it’s become very cosmopolitan. We make dry fruit laddoos and kadha prasad (rava with ghee and sugar) at home on auspicious occasions or birthdays and marriages,” says Dr Meeta whose husband’s grandfather, Sardar Khem Singh, was a Risaldar and the first president of the Ameerpet Gurudwara.

A community which is self-sufficient to the nth degree and doesn’t turn away anyone from their door when they ask for help, it continues to astound others with its giving nature.

Anyone who has visited a gurudwara at least once can attest to the delicious and homely food served at the langar. At the Ameerpet gurudwara which serves langar to some 600 people during weekends, the menu comprises rotis, maa chole ki daal and salad. The food is prepared by kar sevaks (volunteers). Kar seva can be anything, from washing the vegetables, cooking the dal, making chappatis, serving the food or even washing used utensils or sweeping the hall.

“A lot of hostellers studying in nearby institutes tend to miss ghar ka khana and come here to have meals. On weekdays, we also serve full meals along with sweets like kheer. The idea is no one should leave here without a full stomach,” says Bhagender Singh. Caste, creed, financial status are done away with in a langar, where people from various communities or stratas of societies come and eat together. Devotees also sponsor the langar and have the option to decide what they want on the menu.