The six-member aerobatic team displayed various formations, especially shockwaves, sphere and ‘Y’ for youth of the country, which left the students spellbound. Despite the prevailing weather conditions not being conducive, the team came up impeccable formations and enthralled the students.

The event was organised to mark the 20th anniversary celebrations of Kargil Vijay Diwas. Students from schools and colleges from the twin cities visited the Air Force Station and watched the daredevil display of the IAF personnel. A few minutes before the Surya Kiran’s performances that lasted for over 20 minutes, 2.20-tonne Chetak helicopter drew the attention of students by performing rescue operations carried out during floods and earthquakes.

Another display was the Chetak helicopter’s role in assisting the army men during war and how it shifts the injured jawans to hospitals. It enacted a scene how lives of the crew of aircraft are saved in contingencies such as a glitch in the engine. 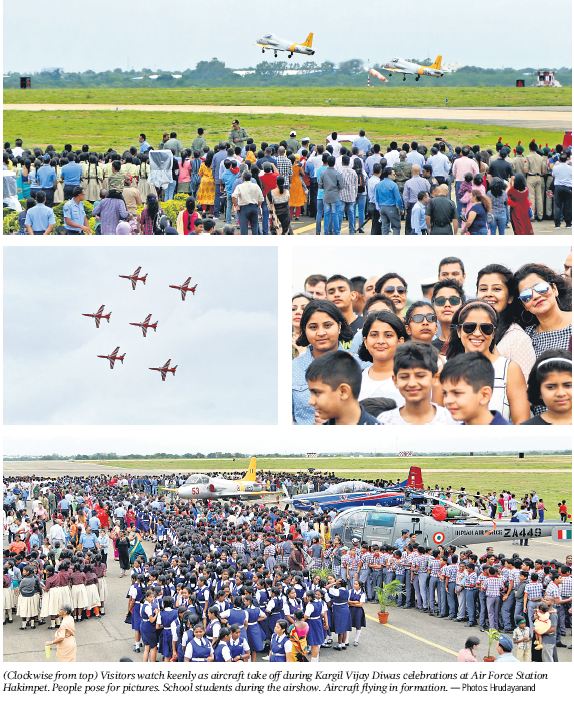 According to IAF, the objective of the celebrations was to evoke a feeling of patriotism, especially among the youth, and to pay homage to the valiant soldiers. The IAF said 2019 marks the 20th anniversary of victory in the ‘Kargil War’. During the war, the IAF had conducted operation ‘Safed Sagar’ and was pivotal in shaping the war’s successful course and outcome for India.

A static display of Kiran and Pilatus aircraft, Chetak helicopter and equipment was also organised to enable students to have a glimpse of them. Motivational lectures with special reference to Kargil air war were also given at the venue.