Venezuela is in a fourth straight year of recession, with double-digit declines in its GDP. The inflation rate is expected to reach a mind-boggling one million percent this year, according to the International Monetary Fund. Industry is operating at only 30%, hit hard by the crash in oil prices since 2014 in a country that earns 96% of its revenues from crude.

Once among Latin America’s most prosperous nations, holding the world’s largest proven oil reserves, the recent fall in oil prices accompanied by corruption and mismanagement during two decades have left Venezuela in a historic economic and political crisis.

It all began when President Hugo Chavez entered office in 1999 but the crisis accelerated after Nicolas Maduro’s assumption of power in 2013. When oil price plummeted in 2014, the government’s response was to print more money, which only pushed up inflation.

In efforts to boost the economy, President Maduro redenominated the bolivar, loosened foreign capital rules and increased minimum wages massively. Yet, Venezuelans continue to flee the country in thousands.

Among the bare supermarket aisles and pharmacy shelves, interminable bank queues to withdraw scarce cash, the feeling of disillusionment and haplessness is palpable in the streets of Caracas and beyond.

“It’s a disaster, we don’t have basic foods. The measures are pure lies, they’ll bring more hunger and unemployment,” Dr Marielsi Ochoa told AFP. Shelves are filled with cleaning materials and fizzy drinks but meat, chicken, eggs and corn flour – which are Venezuelans’ staple diet — have disappeared. But Maduro’s socialist government insists the reforms will work, branding the exodus a ‘right-wing campaign’.

Venezuela today, Zimbabwe a decade ago, before that the rump Yugoslavia, Hungary and Germany. Hyperinflation is generally considered to exist when prices rise by over 50% in one month. The worst hyperinflation was in Hungary in 1946 when prices doubled every 15 hours. Hyperinflation quickly leads to goods disappearing from shops, with governments having to introduce rationing. “Venezuelans lost an average of 11 kilos in 2017 compared to 2016.”

Venezuela has devalued the bolivar by 96% under a new exchange rate announced by the central bank on August 21. The announcement came a day after new banknotes, stripped of five zeroes, entered circulation as part of a radical plan to curb hyperinflation. Expressed in the previous “strong bolivar” currency in effect, it amounts to a hike from 248,210 to 60,00,000 to the dollar.

The new paper bills have two coins and paper denominations ranging from 2 to 500. The lowest represents the buying power of 200,000 current bolivars while the highest stands in for 50 million. Both old and new currencies will remain in circulation in the transitional period.

Maduro also ordered banks to adopt the petro as a unit of account on August 27. One petro would equal $60. Banks must now reflect all financial information in bolivars and petros. He also launched an offer of bonds backed by small gold bullion.

The plan also includes a 3,400% increase in minimum wages and a hike in gasoline taxes, which for years have been the world’s cheapest. The socialist president, elected for another six-year term in May, has fixed the currency to the country’s widely-discredited cryptocurrency, the petro, which is in turn linked to the price of a barrel of Venezuelan oil (about S$60). The value-added tax is also climbing from 12% to 16%.

Economists say these measures are likely to accelerate hyperinflation rather than address its core economic troubles, like oil production plunging to levels last seen in 1947.

“At first the immigration was by people with capital and a university education,” said Alfonzo Iannucci, who runs a website that diffuses testimonies from the Venezuelan diaspora around the world.

Tomas Perez Bravo, Central University of Venezuela, a diaspora think-tank, says now there is only one type of person leaving the country. “The poor are leaving because now everyone is poor.” He adds they are fleeing on foot “not because they’re not chemists, sociologists or engineers” but because “it would take 30 years to save up for an airplane ticket.”

In terms of numbers, it has already surpassed the Cuban exodus following Fidel Castro’s revolution. Around 1.4 million Cubans fled to the US with another 300,000 heading for other countries. Of the 2.3 million Venezuelans living abroad, more than 1.6 million have fled the country since 2015.

Venezuelan sociologist Tomas Paez points to the “economic deterioration… the terrible scarcity and value of the bolivar” stating that it is “a humanitarian crisis”. There is massive food shortage, medicines and medical care, jobs scarce schools are without teachers and crime rates are escalating.

Paez states that between 10 and 12% of Venezuelans currently live abroad. Traditionally, the majority were in Colombia, the US and Spain — but Peru has seen the biggest influx percentage-wise since 2015 with the numbers increasing more than 150-fold. Peru and Ecuador both announced stricter border controls. 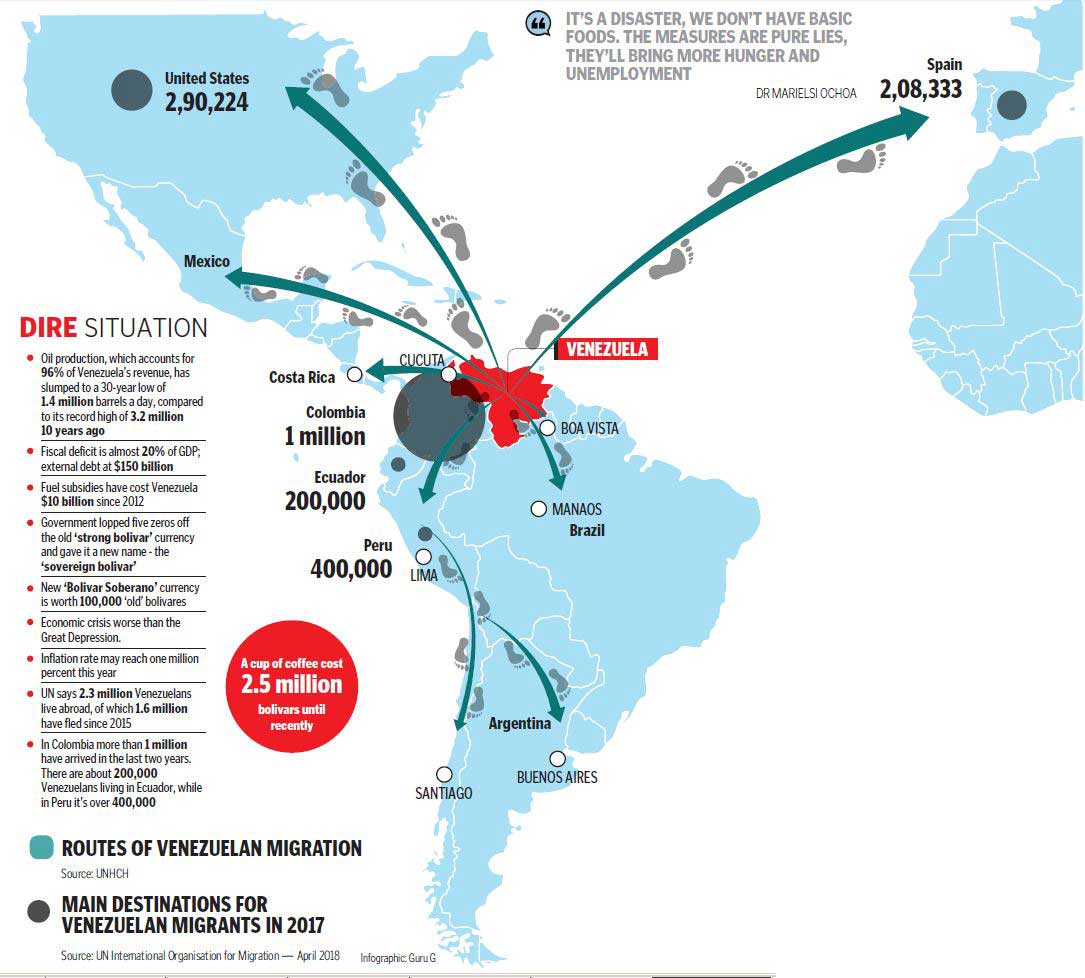