Climate change is real and we are all experiencing it. Change in the natural world is a common phenomenon but the pace at which nature is changing is a cause for concern. It is important to realise that human activities are acting as catalysts for the rapid change in ecological processes. Greed, profits and materialism have become inalienable features of ‘modern man’.

Resources cannot exist in a vacuum. Wonders, sceneries and resources that are essential for human existence are all bestowed upon us by ‘Mother Nature’. Not only the survival but also the happiness of humans depends directly or indirectly upon nature and its components. It is clear that nature is finding it difficult to meet the infinite needs of modern man.

Nature has an innate ability to heal itself. It repairs itself if the damage is below or on the threshold limit. If the damage to the environment is beyond the permissible limits, there comes the demand for action from external agents, ie, human beings to control it or limit the scale of exploitation of nature.

Mother Nature sends alarming signals in the form of disasters to direct humans to correct their developmental pattern in general and human behaviour specifically. If they turn a blind eye towards these signals, they have to face the consequences. We must realise that it is ‘man’ who depends upon Nature for his survival and it’s not the other way round.

Modern science has allowed humans to know Nature and its dynamics. Rationality and reasoning have played a key role to help understand the utility of natural resources and the ways to exploit and make better use of them. It is this enquiry into natural sciences that provided an impetus to modern industrialisation. Ever since the advent of industrialisation, the equations between man and Nature is being altered.

Laissez-faire economics demands unhindered supply of resources to meet the limitless wants of modern man. It should be noted that there is a difference between want and necessity. The capitalist economic system through its marketing tools defines the tastes and aspirations of consumers. The capitalist system assigns value, monetary or social, to a commodity.

Status of an individual depends upon what he owns rather than the individual himself. If he owns a commodity that is of higher value, obviously, his social rank is higher. It is the system itself that decides his/her wants rather than personal needs or wishes. Marketing systems hinder individual thinking. In a neoliberal framework, levels of satisfaction or happiness of an individual are decided by invisible/visible elements.

Imagine an urban lad who has a gadget with advanced technical features that is enough to meet his professional and personal needs. But modern marketing techniques and tools force him to buy a new gadget that has just arrived in the market with slight modifications. This happens in other domains too and the cycle of use and throw continues. In the capitalist system, not only consumption goes beyond the limits but also the wastage of resources. 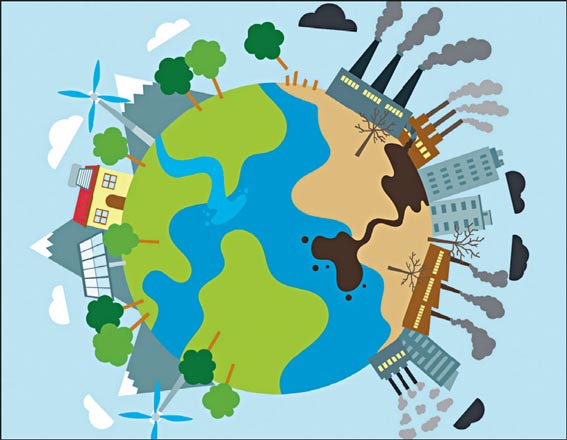 In a scenario of fierce competition to gain acceptance and as the social status of an individual is being decided by material aspects, there will be a huge stress on Nature not only in terms of exploitation of natural resources but also the management of waste. Ownership of natural resources in a very few hands also increases the pressure on Nature.

Although disasters impact the poor and the rich alike, it is the poor who bear the brunt of climatic changes as the latter is armed with economic weapons to cope with them. The present political discourse with respect to the environment has been confined to pollution, emissions and other issues rather than redefining the developmental strategies that are compatible with ecological diversity and inclusion.

Disaster management as a discipline is completely misleading. As the name suggests, it emphasises managing disasters (natural or man-made). Instead of addressing these and correcting the course of development, it revolves around preparation, mitigation, response and rehabilitation. It neglects the root cause of climate change.

Due to the growing civil consciousness about the ‘Green’ in the western world, the western capitalist class has been forced to opt for technologies that are sustainable in the long-term and have less impact on the environment. On the one hand, the capitalist class from the advanced nations is trying to keep its control over high-end tech industries by keeping them on their own soil and on the other, they are shifting their industries that are characterised by highly exploitative character, be it of Nature or workforce, to the developing nations.

As the green technologies are at the nascent stage and are yet to show results, it is in the long-term interest of the planet to alter economics along the lines of eco-friendliness and inclusion.

It is unfortunate to see that the South Asian nations, except Bhutan, have failed to design a development plan that meets their requirements. This is not to suggest that these nations have to shelve the process of industrialisation. Unplanned industrialisation leads to an environment where the negative costs on Nature and poor are ignored.

Being one of the disaster-prone regions in the world, South Asia is also home to a large number of poor people. Already grappling with issues like inequalities, population explosion and others, climate change and global warming pose a huge challenge to policymakers from the region.

The South Asian region is synonymous with droughts, floods, earthquakes and other catastrophes. Due to its geographical location, covering Himalayan glaciers in the north and the Indian Ocean in the south, any change in climatic conditions in the region is going to have a direct impact on all securities, and especially food.

The time has come to address climatic changes and to improve the ecological health of the region as well as the planet.