Hyderabad: With the opening of first level flyover at Biodiversity Junction on Thursday, the Strategic Road Development Plan (SRDP) package IV is completed. As many as six structures were constructed under the package and apart from facilitating smooth flow of traffic, these structures have given a new impetus to development in the corridor.

The metamorphosis happened in just about two years. During the launch of Ayyappa Society underpass on January 3, 2018, Municipal Administration and Urban Development Minister KT Rama Rao announced that this was just beginning and 2018 would be year of execution.
Accordingly, GHMC has now completed all the six projects under SRDP Package IV.

The SRDP, State Government’s long-term initiative in easing traffic congestion in different parts of the city is already yielding results. The works are being taken up in different packages and the civic body has completed package IV with a total cost of Rs 379 crore in the IT corridors of Madhapur, Cyber Towers and Kukatpally.

A bidirectional flyover was constructed from Majestic Shopping Mall to Malaysian Township. The 1230-metre flyover which was constructed at a cost of Rs 97.93 crore is facilitating in conflict free movement of traffic at the junction, besides easing traffic congestion on JNTU – Hitec City route
– Project commenced on April 2, 2016
– Project completed on April 6, 2019 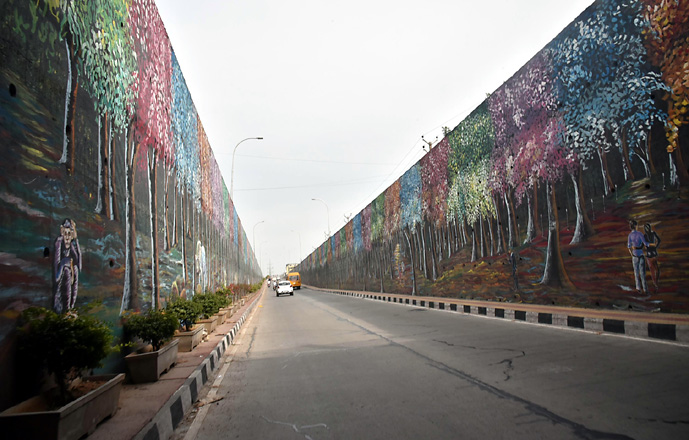 This junction is now equipped with one bidirectional underpass and one bidirectional flyover. Prior to the construction of these structures, traffic snarls were a regular feature in the locality which have improved ever since the two structures were thrown open to traffic.

a. The 830-metre long Mind space flyover was constructed with a cost of Rs 80.23 crore. After the structure came into operation, traffic movement from Inorbit Mall end towards Hotel Radisson has improved.
– Project commenced on April 2, 2016
– Project completed on November 9, 2018

b. The 365-metre long underpass was constructed with a cost of Rs 51.41 crore. The three-lane bidirectional is now aiding in smooth flow of traffic from Hitec City end to Biodiversity Society end.
– Project commenced on April 2, 2016
– Project completed on April 28, 2018

One of the prominent junctions in the IT corridors, there are two unidirectional flyovers at the junction. The two flyovers are constructed at different levels to ensure smooth flow of traffic at the junction.

a. The first level flyover, which is 690 metres long, is constructed with a cost of Rs 30.26 crore to facilitate traffic flow from Gachibowli end to Mehdipatnam end (Raidurgam).
– Project commenced on April 2, 2016
– Project completed on May 21, 2020

b. The second level flyover at the junction was constructed with a cost of Rs 69.12 crore. The 990-metre long structure is easing traffic flow on Old Mumbai Highway from Mehdipatnam to Mind Space end (Raidurgam).
– Project commenced on April 2, 2016
– Project completed on November 4, 2019