It was the most keenly followed election in US history. According to some foreign policy experts, the last four years witnessed a remarkable change in US policies with the outside world under ‘America First,’ which has, in turn, isolated America. With unconventional interaction with friends and foes alike during President Trump’s regime, it becomes necessary to ascertain the expected changes when Joe Biden assumes President’s office.

Biden, who was a part of Obama’s team, has expressed a desire to make America lead again after it lost its way in pursuit of “Let’s make America great again.” At the fag end of President Obama’s tenure, a desire had developed to look inwards with the belief that resources are better utilised for domestic purposes. Trump also decided to pull the US away from endless wars worldwide. However, much of his international relation efforts resulted in antagonising almost everybody.

A recent survey showed that contrary to common belief, the American public is not very opposed to the idea of American involvement in issues around the world, more so when everyone looks to the US to guide them. Trump’s regime saw worsening of ties with Nato, exiting treaty with Iran, problems with WHO, uncertain climate issues, etc, making it necessary to have a fresh look at everything and especially with allies. Although the Senate’s possible Republican control may constrain Biden, one can expect a flurry of executive orders to put things back on track.

This issue will require immediate attention as Trump had pulled out of the Paris accord, leaving this endeavour rudderless. Biden has expressed his seriousness about rejoining the Paris agreement and of motivating other nations to boost their commitments towards keeping climate right.

Trump had also revoked some measures taken by the Obama administration for climate control dubbing them as job-killing measures. Therefore, the new administration needs to balance job creation and limit carbon pollution, especially from power plants. A decision is also to be taken regarding the revoked moratorium on coal leasing.

This issue has gained prominence due to the pandemic. Trump withdrew from the WHO after accusing it of working under Chinese influence, resulting in a loss of funding for the WHO, although China and some European nations pledged more amount to take care of the shortfall.
Withdrawal from the WHO will also result in problems for the US as it will have less influence in global affairs. Health priorities around the world where the US has invested will also suffer. The WHO helps countries to deal with their health issues lest they become global problems. Many new competing health groups can come into being if the authority of the WHO as custodian of global health authority gets diluted.

Biden has indicated many times that returning to the WHO is his priority. Moreover, some systems and protocols have to be in place on pandemics’ management and checking Chinese influence. 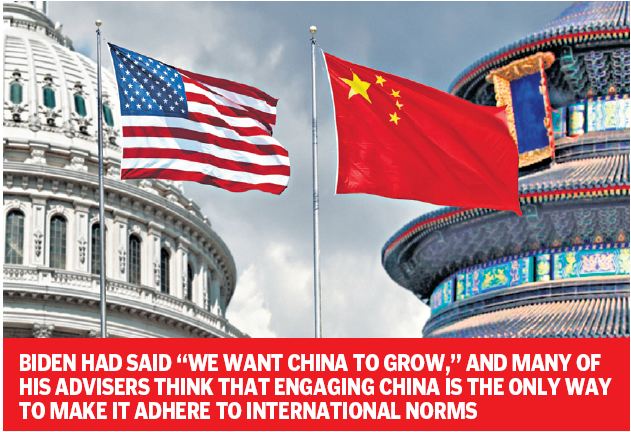 The US’ relationship with China has been tension-ridden and tricky. The last four years saw a deterioration of relations with China on climate change issues, the North Korean nuclear programme, and Covid-19.

During his campaign, Trump blamed China for the Covid-19 mess hoping it would reduce the heat on his administration regarding handling the pandemic. His pulling out of the WHO citing Chinese influence further complicated issues.

As per many experts, Biden favours a conciliatory approach towards China. There is also an opinion that one needs to work with China on climate, Covid and North Korea. Biden recently said in a media interaction that “we want China to grow,” and many of his advisers also think that engaging China is the only way to make it adhere to international norms. Biden favours dealing with China by creating a united front of US allies, which would together make more than half of the world’s economy.

Biden has expressed his intention to rejoin the Iran nuclear deal if Iran ensures compliance with the pact. It won’t be an easy task for Biden as much water has flown under the bridge since Trump pulled out of the deal. Iran is now a changed country as far as foreign policy is concerned, and the new administration will find it more under Russian and Chinese influence compared with four years ago.

China is building and equipping Iran’s port at Chabahar, which is critical for a pipeline project that can challenge the efforts to ban Iran exports. China has also made $400 billion in investments to upgrade Iran’s oil sector, which would significantly boost its economy, according to reports.

After the UN ten-year arm embargo on Iran was lifted in the later part of 2020, a military component has also come into the relationship between Iran and Russia. Media reports indicated a naval exercise in 2019 across the Persian Gulf and the Indian Ocean, in which Russia, China, and Iran participated.

Hence, it appears difficult for the new US administration to pull Iran away from Russian and Chinese influence. There have to be fresh negotiations and it would require strong reasons for Iran to come along.

This has been a complicated case for US policy advisers since Obama’s time. During his time in Iraq, military leadership tried to implement counter-insurgency operations in Afghanistan. This involved building relationships with the local population and focus on development work. This approach had its critics but worked well in Iraq.

As per author James Mann, when Obama announced increasing troops’ strength in Afghanistan, the first senior official to dissent was Joe Biden. He felt counter-terrorism is a better option than counter-insurgency. Biden felt more troops would mean more casualties. Therefore, it would result in a decrease in public support and also within the democrats.

Trump administration preferred dealing directly with the Taliban, which ultimately led to troops’ withdrawal and intra-Afghan negotiations. Some policy experts believe that the Biden administration will have to choose for a broad-based intra-Afghan policy along with careful implementation and monitoring of earlier agreements with the Taliban. As there are media reports that Michèle Flournoy can be the next Defence Secretary, it can be assumed that the counter-insurgency strategy will get a boost.

The new administration would require a fresh approach to energise foreign policy with rejuvenated alliances with allies. Its success in repairing strained relationships is important not only for the US but also for the whole world order.

(The author is a finance professional based in Toronto)