The Citizenship Amendment Bill (CAB), which is all set to be passed by Parliament, will mean the realisation of a long-cherished dream of Vinayak Damodar Savarkar, the Hindu nationalists’ leader, who popularised the concept of Hindutva.

Savarkar had held that at some point in future, the word ‘Hindu’ might come to indicate a citizen of India and nothing else. In his book, ‘Essentials of Hindutva’, Savarkar wrote: “Although the root meaning of the word Hindu like the sister epithet Hindi may mean only an Indian, yet as it is we would be straining the usage of words too much — we fear, to the point of breaking — if we call a Mohammedan a Hindu because of his being a resident of India.”

Prime Minister Narendra Modi on the occasion of Savarkar Jayanti commented on his Twitter account: “I bow to Veer Savarkar on his Jayanti. Blessed with immense courage, Veer Savarkar will always be remembered for his patriotic spirit. He was also a prolific writer and social reformer”. 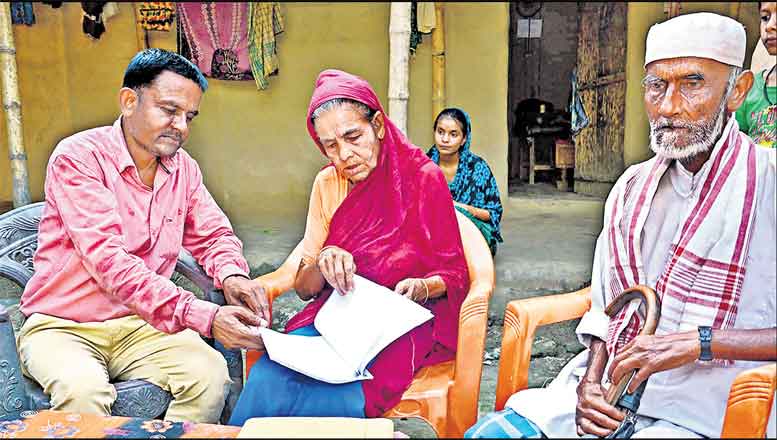 Indeed, the spirit of Hindutva now can be overwhelmingly visible in BJP-ruled India. However, the blueprint for a Hindu Rashtra was drawn long ago. The deck for a nationwide National Register of Citizens (NRC) was cleared during the first NDA regime. Section 14A was inserted in the Citizenship Act of 1955 in January 2004 in the last days of the Atal Bihari Vajpayee-led NDA government.

This section of the Citizenship Act of 1955 provides in subsection (I) that, “The central government may compulsorily register every citizen of India and issue national identity card to him”. This section of the Act was never invoked anywhere in India in the past. The government is now trying to justify the compulsory updating exercise of the NRC in Assam and its future plan to extend the exercise throughout India though the word ‘may’ in the clause denotes that it is not compulsory at all.

On the other hand, the NRC cannot be made compulsory if we read Article 21 and Article 15 of the Constitution of India along with KS Puttaswamy judgment. In this case, the apex court reasoned that privacy is an incident of fundamental freedom or liberty guaranteed under Article 21, which provides that: “No person shall be deprived of his life or personal liberty except according to procedure established by law.”

The gulf between Hindus and Muslims in India had frustrated BR Ambedkar, the architect of the Indian Constitution. Thanks to power-hungry politicians, whose divisive politics widened this gap between the two religious communities, Muhammad Ali Jinnah, the creator of the Islamic Republic of Pakistan, believed that India can never be a secular country.

However, proving Jinnah wrong, Jawaharlal Nehru, Sardar Vallabhbhai Patel, Rajendra Prasad, Acharya Kripalani and others under the leadership of Mahatma Gandhi built a secular democratic India. There are many so-called theocratic democracies in the world. However, no meaningful democracy can be established by recognising a particular religion as state religion. Pakistan today is not only divided on the basis of religion, but it is also divided into sub-national and ethnic groups such as Ahmadis, Shia, Sunni, etc.

Notwithstanding many periodic communal clashes across India and divisive politics for polarisation of votes, the essence of secularism guided the nation since independence. However, with the spectacular rise of Hindu nationalism in India after 2014, all the democratic institutions are being undermined to make space for Hindutva.

Nepal, which was a Hindu kingdom, embraced democracy in 2006 shedding its religious cloak. Secularism is a fundamental right among others in the new constitution of Nepal. Unfortunately, India is heading towards being a Hindu state, if we consider the government’s preoccupation with Hindutva. Celebration of Namami Gange, Brahmaputra, NRC exercise and now CAB are a vivid example of such Hindutva agenda.

The National Register of Citizenship in Assam, took ten years, employed 52,000 government employees and cost the Government of India a whopping Rs 1,220 crore. It is now being considered as a fruitless exercise by many, including the ruling party as the findings are not in conformity with their political agenda. Of the 1.9 million excluded in the updated NRC, majority are Hindu migrants.

Union Home Minister Amit Shah said in Parliament that the mammoth National NRC exercise would be carried out once again in Assam. Can a country reeling under severe economic crisis afford to spend so much money again just to satisfy the majoritarian outlook of the ruling classes? The country has to spend over Rs 60,000 crore and another 10 to 15 years to complete the NRC in all the States and Union Territories. It seems that the NRC exercise is nothing but to target the minorities and harass them.

In view of the widespread protest against CAB in the Northeast, the government has now proposed that all the States of the region enjoying special status under Article 371 of the Constitution and the autonomous regions created under the Sixth Schedule will be exempted from such citizenship legislation.

If such a provision is made under an amended citizenship law, Hindu, Jain, Buddhist, Sikh, Parsi or Christian migrants coming from Afghanistan, Bangladesh and Pakistan will be treated as a citizen of India in the non-Sixth Schedule area of Assam whereas they will be foreigners in Arunachal Pradesh, Meghalaya or in Nagaland.

Such provisions will further complicate the situation as those migrants would throng the areas not covered under Article 371 and Sixth Schedule of the Constitution. Such a move can divide the Northeast. Fortunately, all the agitating organisations of the region have rejected the divisive proposal of the Centre.

If the government succeeds in getting the CAB passed, it will be marked as the first successful step on the part of the BJP-led government in changing the basic structure of the Constitution.