Any relation between the pandemic and state of democracy may sound bizarre to many. But if we look at reports on coronavirus cases published by the World Health Organization (WHO) and other institutions, we can see the pattern clearly. Now the top three worst Covid-affected countries of the world are the United States, Brazil and India, followed by Russia.

Incidentally, these four countries are ruled by populist nationalist governments headed by powerful leaders. Donald Trump (US), Jair Bolsonaro (Brazil), Narendra Modi (India) and Vladimir Putin (Russia) are the four influential world leaders, whose roles in national and international affairs are widely discussed. The alleged common characteristics of these four leaders are their anti-minority, anti-labour and anti-freedom of media and speech stand. They are intolerant to opposition, criticism, are said to be pro-corporate and have scant respect for civil rights.

In the US, the national response of Trump administration to the pandemic has been short-sighted and incoherent; and in the face of crisis, the nation has become more polarised rather than less. With about 40,000 new cases being reported a day, Dr Anthony Fauci, the government’s top infectious disease expert, said he “would not be surprised if we go up to 1,00,000 a day if this does not turn around.” Dr Fauci has said the US has gone in a wrong direction in fighting the pandemic.

The killing of George Floyd and the violent response to the subsequent demonstrations have confirmed the racial and brutal character of the US police. Many citizens, activists and scholars are now worried about the state and future of American democracy. The criminal investigation against Trump for the connection between his presidential electoral campaign and the Russian government has rocked the country. His open threat to the core democratic institutions, independent media, judiciary, bureaucracy and all other democratic bodies has harmed the long-cherished idea of democratic liberalism. The Trump administration’s international policy detracts the strongest US allies and, on the contrary, has allied with autocratic rulers across the world. 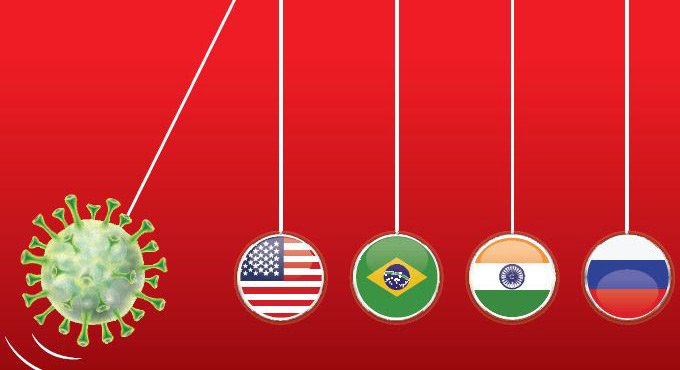 The handling of the pandemic by Brazilian President Jair Bolsonaro is being criticised at home and abroad. His doctoring the pandemic data reveals more than what he wants to hide. Former Brazilian president Fernando Henrique Cardoso criticised the Bolsonaro administration and asked on a televised interview recently: “Do they think the bodies won’t appear?” Fernando was referring to the official underestimation of Covid-19 deaths in Brazil. Former health minister Luiz Henrique Mandetta, who was sacked by Bolsonaro in April for his repeated calls for social distancing which the latter did not support, said data eclipse is a tragedy.

Bolsonaro’s despotic rule is marked by his targeting of minorities such as gays, indigenous people and women. He provokes leftists and social activists. The Brazilian President’s daily trolling does not even spare the mainstream media. His administration has diluted labour rights in the name of reforms much like what’s happening in India. Unemployment, price rise, homelessness and hunger are increasing at an alarming pace.

The progress of Covid-19 was slow in Russia initially. President Vladimir Putin declared on March 1 that the situation in his country was “entirely under control.” We can compare Putin’s statement on Covid-19 with India’s Health and Family Welfare Ministry’s declaration in March that in India the coronavirus is not a health emergency or Trump’s reference to the coronavirus as a “new hoax” formed by the Democratic Party.

In the early part of March, Trump dismissed the threat as seasonal flu. The Russian President, in power for almost two decades, is famous for his aggressive international policy. He’s accused of flouting international law by seizing Crimea and continues to wage war in eastern Ukraine. He is also accused of abusing the power of internet to destabilise democracy in western countries.

Putin tried to exploit the pandemic to influence the people of Russia to get a favourable verdict in the recently-held referendum for a constitutional amendment that would enable him to be in power till 2036 and finally he managed to get the nod in the referendum that ended on July 1. Ironically, at the beginning of the pandemic, the Kremlin had delivered medical assistance to some hard-hit countries, including Italy, Serbia and the United States, in a public relations gesture designed to highlight Russia as a reliable partner and public goods provider.

The response to the pandemic in all the worst suffering countries was inadequate and even counterproductive. The epicentre of the pandemic – China – was negligent and pushed the virus to spread throughout the globe. Chinese authorities failed to communicate crucial information and allowed millions of people to travel throughout the world when the infection was traced in early December last year. It is true that like all other so-called democratic regimes led by autocratic leaders, China’s free speech, press freedom and civil rights status are plunging. However, the Communist party’s grip over aspiring individual leaders is firm. Now Chinese premier Xi Jinping is confronting such a pressure from inside the Communist party.

In India, the increase in infections from 500 in March to nearly 7 lakh in the first week of July corroborates the Modi government’s autocratic style of functioning. The chaos can be gauged from the fact that while certain cities and areas are imposing total lockdown again to combat the spread of the infection, the government is unlocking the country in a phased manner.

Dismantling of the Planning Commission, demonetisation, citizenship amendment law along with nationwide NRC, diluting Article 370 and dividing Jammu & Kashmir into Union Territories, construction of Ram Mandir, increasing attacks on the press and free speech, attacks on minorities and the country’s worst communal violence in Delhi are a few that characterise the current regime.

We all know that till now there is no cure for the pandemic. When there is no apparent treatment, the best medicine against the new virus is consensus, cooperation and discipline. All these three components of social resistance to the pandemic find no place in an autocratic state.