“What is freedom to you?” the great blues and jazz singer Nina Simone was asked in 1970. Simone had just lived through a turbulent 1960s and through songs like ‘I wish I knew how it would feel to be free” defined the political mood of the civil rights movement. She replied, “I tell you what freedom is to me. NO FEAR! I mean really no fear. If I could have that half of my life. No fear. Lots of children have no fear. That’s the closest way. That’s the only way I can describe it. That’s not all of it. But it is something really, really to feel.”

In that one moment, she reminded us of the intimate connection between fear and freedom that may be so universal but also very particular to the black American experience. As the US celebrated July 4, the day that marks its Independence Day, that fear seems to punctuate freedom.

This summer, as the country roils in protests and upheavals, Americans are once again at a loss for answers to the perennial question of how to end, in the words of Martin Luther King Jr, “the unspeakable horrors of police brutality.” As Americans watch the last nine minutes of George Floyd’s life, fear and rage are the inevitable reactions. Fear that this could be your fate, followed by rage that this is still the fate of black America.

Nothing drives fear into black men’s lives as the sight of a policeman. As white Americans partake in the national mythologies of life, liberty and the pursuit of happiness, the black American experience has been hemmed in by the stark reminders that such mythologies are just that. According to philosopher George Yancy, fear “partly captured the contradiction of being black and American. Black people were not the American ‘we’ but the terrorised ‘other.’”

As we look to make sense of this moment of rage and protest, many have gone in search of parallels in America’s past. We hear about the riots when Martin Luther King Jr was assassinated in 1968. We hear about the riots in Los Angeles (1965), Detroit (1967) and, again, in Los Angeles (1992). Yet, the protests today are not episodic, but the lingering wounds of the black American experience.

This lived experience of the brutality of police encounter animates black art and popular culture. As many black Americans wake up to systemic violence, it should be remembered that black music has always decried this violence and black artistes mused about the possibility of freedom unhindered by fear. 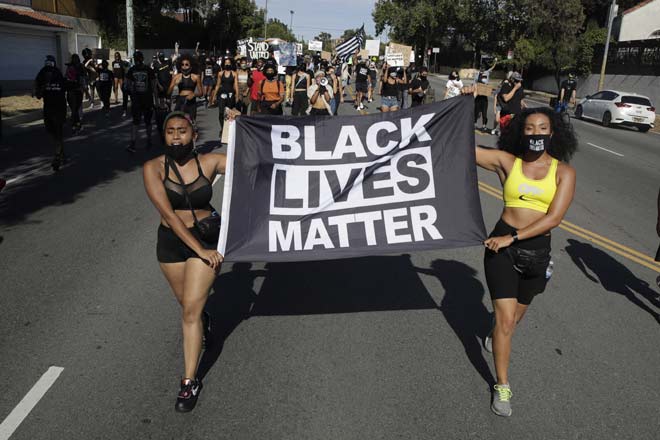 From Plantation to Nation

No music genre has captured the violence and brutality in its essential stripped down version like the rap singers of the last few decades. These popular singers — including Ice-Cube, KRS One, NWA and Killer Mike — rendered the visceral experience of living with policing in black neighbourhoods. Their songs, often sidelined for their profanity, convey the most evocative descriptions of the physical violence at the street level felt by black men.

KRS-One sings in a simple style about the dark underbelly of American history and society. His ‘Sound of Da Police’, produced in 1993, a year after the Los Angeles riots, is typical of his didactic style. The rap song cuts to the central imagery of the police in hip-hop and places it within a long history of black American encounters with the law. Most importantly, it moves between two important moments in history, the slave past and the false freedoms of the present. The plantation overseer has simply been replaced by the police officer, implying that while legal slavery has ended, the country hasn’t escaped its plantation history. In his words:

“The overseer rode around the plantation
The officer is off patrolling the nation.”

Since 2013, the Black Lives Matter movement has brought light to the fundamental connections to the long history of black dispossession and genuinely made inroads into the usually tepid world of white intellectual spaces. KRS One goes on to talk about how his ancestors had to deal with the police. The year 1619, when the first African slave arrived in the Americas, has now come to stand as the trope for the long history of black alienation. In the ‘Sound of Da Police’, KRS One highlights that history of alienation with lines such as “After 400 years, I’ve got no choices!” It’s brought home more viscerally through the long line of ancestors (“grand father…great, great”) and finally ends by asking “When it’s gonna end.”

Why God Don’t Protect Me

It would be a mistake to imagine this as a recent outpouring in black American songs and writing. In 1947, Langston Hughes, the towering figure of the ‘Harlem Renaissance’ captured the fear best when he wrote the poem, ‘Who But the Lord?’ It is almost worth reading the poem in its entirety to feel the palpable sense of vulnerability and fear. Here the policeman, interchangeably called “the Law,” is a haunting figure of violence in both the imagined and real life. The feeling of fear and finality is so raw in Hughes’ poem when he describes the policeman heading towards him.

And sure enough in the next section, he says:

The poem is framed within a structure of religious appeal but also at the same time reveals the emptiness of that appeal.

“Now, I do not understand
Why God don’t protect a man
From police brutality.
Being poor and black,
I’ve no weapon to strike back—
So who but the Lord
Can protect me?”

Today, in Trump’s America, as the nearly 40 million black Americans ponder their future, it is a vision of America that is at stake. For Trump’s white nationalist vision, the reigning slogan is ‘Make America Great Again’ to take us back to a golden age when America was great. But that great past belonged only to white America.

For, as Langston Hughes reminds us in his poem, ‘Let America Be America Again’, a great America is an America that is yet to emerge “The land that never has been yet—And yet must be—the land where every man is free.” Once again, he says, “O, yes, I say it plain, America never was America to me, And yet I swear this oath—America will be.” That America — 155 years after the abolition of slavery — has yet to materialise. That perhaps explains the rage of the millions on the streets of America today.