Hyderabad: The 2015 World Cup was a turning point for English cricket in many ways. Their shocking loss to Bangladesh, the second successive one in World Cup, resulted in their first round exit. It did not go well with the cricket board and a major shift took place.

Since then, they played ODI cricket with a full competitive spirit. The Eoin Morgan led side now sits on top of the ICC ODI rankings. Being the tournament hosts, England will start as favourites in the World Cup as they know the conditions better than any other teams.

The England batting looks the most composed and suited for ODI cricket among all the teams. After the 2015 World Cup, England reached the magical score of 400 four times and now they hold the record for the highest two totals (481/6 vs Australia and 444/3 vs Pakistan) in ODI history.

The openers, Jonny Bairstow and Jason Roy are capable of dismantling their opposition bowlers with their aggressive intent. Both of them looked in terrific form in the past year and it is no surprise that England has got the best powerplay starts in ODIs during this period.

Joe Root and skipper Eoin Morgan are good with pacing their innings and their experience of coming good under pressure situations is an advantage for the England side. With the destructive wicket-keeper batsman Jos Buttler and aggressive all-rounder Ben Stokes to follow, England middle-order looks threatening to any opposition.Buttler is capable of playing the dual role of holding the innings and being the finisher. He is likely to be England’s trump card in the World Cup. 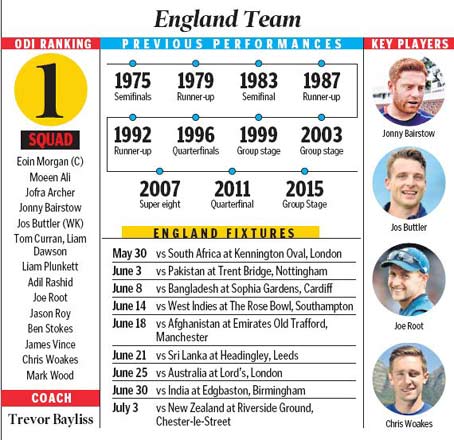 Moeen Ali and Chris Woakes are handy with the bat and good in producing crucial wickets. The duo, being seasoned all-rounders add depth to the squad. The England pacers, Tom Curran, Liam Plunkett and Jofra Archer are also good with the bat which makes them one of the longest batting line-ups in this World Cup.

While Tom Curran and Archer are good in death overs, Chris Woakes and Plunkett are mainly wicket-takers. The inclusion of Archer in the side just before the World Cup certainly strengthened their bowling. Archer’s raw pace and his height advantage along with variations make him a dangerous new-ball bowler.All-rounder Liam Dawson and spinner Adil Rashid along with Moeen Ali are in charge of handling the middle overs.

Despite playing in all the editions so far, England team never won a World Cup after reaching thrice in the final. However, Morgan’s side will be well aware that this is their best chance to lift the cup.