The concept of public relations emerged in America at the beginning of the 20th century and the US became the House of Global Public Relations in the 21st Century – a model to all countries. Today, every organisation — be it public or private — practices public relations with a global perspective to reach out to domestic and international stakeholders.

If the Indian government has a separate Ministry of Information and Broadcasting to inform, educate and motivate people, the US government, without any centralised Ministry, has an independent and self-contained Public Affairs Unit in each ministry and every Federal department.

On why there is no centralised ministry of information in the US, Dr Dennis L Wilcox, Professor Emeritus of PR and past Director, School of Journalism and Mass Communication, San Jose State University, said, “people in the US are suspicious of the Federal government that they might misuse the information service to influence the people with propaganda material.” As there is a strong private sector and a very strong private media, the government did not feel the need for a separate ministry.

Public relations service is organised at five levels: the White House; Congress; Federal Agencies; State Governments and the Local Governments. This is to ensure dissemination of information at every level clearly, efficiently and to the widest number of people about policies and programmes of respective agencies.

Atop the government public relations is the White House. The President receives more media attention than Congress and all the Federal agencies combined. The White House Press Secretary has a greater role in media relations, issuing press releases, responding to reporters’ questions at daily briefings, etc. In fact, the Press Secretary is the ‘Face and Voice’ of the President.

In the US government, the nomenclature of public relations is not used. Instead, it’s Public Affairs and the officials are attached to various Federal agencies. One of the largest public affairs operations is conducted by the Department of Defence that oversees the preparation and distribution of ‘Home Town’ press releases by the military, which is the longest running public affairs. About one million news releases are issued annually. An exotic assignment for military public relations is giving background briefing and escorting journalists for coverage to battlefield military operations.

Big corporate houses such as IBM and Coca Cola, which operate in a highly competitive environment, are more sensitive to policy issues and consequently, to public attitudes and corporate reputation. So their corporate communication departments place more emphasis on establishing interactive social media sites, regular contact with traditional media, sponsorship of events, writing speeches for executive, media releases and counselling management about issues that could potentially affect the bottom line.

Public relations in the corporate sector is divided into specialised sections to deal with the respective stakeholders such as media relations; investor relations; consumer affairs; government relations; community relations; employee communication, reputation management and crisis management. Each section has either a Manager or a Director, who functions under the control of Vice-President. 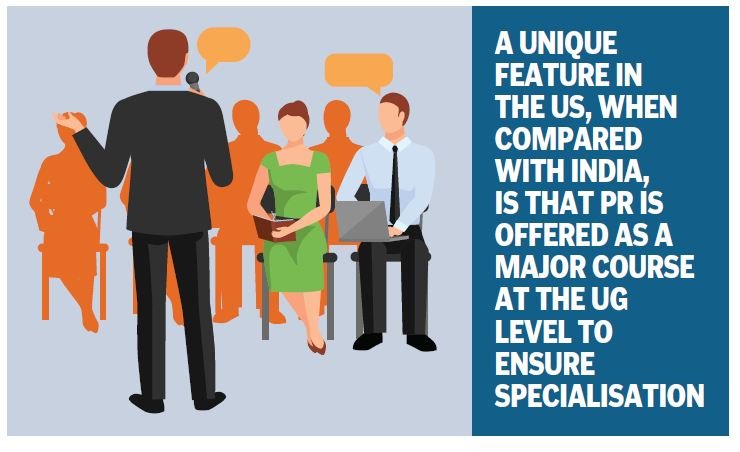 Global public relations, also called International PR, is the planned and organised efforts of a corporation, an institution or a government to establish and build relationships with the publics of other nations. When the need for global communication was felt, the US and European nations also began exporting their public relations to Asian and African countries.

Hill+Knowlton, for example, claims to be the first US PR agency to launch a PR event in China.
Global PR firms not only established their branches in other countries but also began affiliating with Indian and Chinese firms. Hoffman Agency with worldwide headquarters in San Jose, has its Asia-Pacific headquarters in Hong Kong, Europe headquarters in London and branches in Beijing, Shanghai, Japan, Singapore, Korea and Indonesia. In fact, the US PR today is the guiding force across the world.

The US is ahead of all countries in the world both in PR education and PR literature. Many universities there have a three-tier PR education at UG, PG and Doctorate levels. A unique feature, when compared with India, is that PR is offered as a major course at the UG level to ensure specialisation. Four majors: Journalism; Public Relations; Advertising; and Mass Communication are offered, while at the PG level, MA Mass Communication with different specialisations are also pursued.

One major step to improve standard and professionalism in public relations was the establishment of accreditation programme. The Public Relations Society of America was the first PR group in the world to introduce professional accreditation about 60 years ago.

10 interesting features of PR in America

Based on my observation and interaction with academia and PR professionals in the US, I have identified, 10 interesting features of PR in America which India can benefit from:

1) Research: PR research has become more sophisticated and includes the concept of evaluation.

2) Policymaking: PR is involved with top management in policymaking rather than just communicating.

3) Persuasion Banned: Congress banned the concept of persuasion of people in government as it amounts to influencing the minds of people. Instead, the emphasis is on dissemination of information so that people could form their own informed opinion.

4) PR Education: Is offered as a major subject at the UG level on a par with Journalism to ensure specialisation in PR.

5) PR Agencies: These agencies, which brought in professionalism both at national and international communication, play a dominant role in corporate PR.

6) Media Relations: Effective relations with media gets top priority so as to reach out to all stakeholders. In-house PR entrusts media relations to PR agencies.

9) Innovation: This is key to the success of the US in scientific and technological development. This has an impact on PR too

10) Professional Accreditation: The PRSA introduced professional accreditation to improve standards and professionalism in PR. Candidates have to take a two-tier exam – one online before a panel of PR peers and a two-and-a-half hours written exam on core topics of PR. Those who pass, earn the credential APR (Accredited in Public Relations).

(The author is Director, Information and Public Relations Department [Rtd])