Hyderabad: Having set the disinvestment target of Rs 2.1 lakh crore for FY 2020-21, the Union government is looking for ways to shore up its finances; the Cabinet too has cleared the stake sale of about 26 public sector units (PSUs).

While there is an immediate need for fresh income for the government, post the economic slowdown and the Covid crisis, questions are raised whether divestment during such a slippery phase of the economy will get the right valuation or there no alternatives. However, experts say indiscriminate selling of public assets will not augur well for the nation.

It is pertinent to note that PSUs have seen significant erosion in their market value since 2014. Their current market capital is Rs 12.2 lakh crore, down Rs 6.9 lakh crore from May 2014 at Rs 19.1 lakh crore.

The share of public sector firms and banks in the total market capitalisation of all listed companies on BSE has also fallen sharply by 15 per cent from 23 per cent in May 2014 to around eight per cent in 2020. Besides a dip in the market cap, through large dividend payouts, the PSUs have had to curtail their own expansion plans.

Flaw in the model

Dr Vikas Singh, a senior economist, said, “Disinvestment remains unattractive to investors where a minority stake of the government is available for buying, and the control/decision making on the company still lies with the government. If an investor buys one per cent or 49 per cent, it makes no difference. ONGC buying 51.1 per cent stake in HPCL did not add any value.”

He added, “Investors are not interested in acquiring Air India as the airline is grounded to a level where it cannot be revived further. An asset should be sold before it becomes unsalable. It is evident that the government is helping the private sector, and the aviation sector is one such example. Divestment in its present form is not useful.”

The government recently received bids for acquiring its stake in BPCL. However, Reliance Industries and global oil majors Saudi Aramco, BP, and Total did not make a bid. The government wants to divest its 53.29 per cent stake in the petroleum retailer to raise over Rs 40,000 crore.

According to Vijay Kumar Balakrishnan, former CMD of Total Oil India, “Disinvestment plans of BPCL with so few bids need to be kept on hold. The Government of India needs to consider this as an opportunity to create a mega integrated oil company, similar to Saudi Aramco.”
In January, the government set a deadline of March 17 to sell its 100 per cent stake in Air India. However, as there were no takers, the deadline has been extended multiple times. To make the offer attractive, the government has amended the preliminary information memorandum recently to attract buyers.

‘Govt should infuse capital to save PSUs’

Hyderabad: India over the years has taken out more capital from the PSUs than infused capital in them, starving them for funds to meet their full growth potential. This has turned them into non-performing assets, eventually bringing down their earnings and market value. The valuation of most of the PSUs has become ‘pathetic’, and the government needs to look at alternatives other than disinvestment, says an expert.

Anil K Sood, professor and co-founder, Institute for Advanced Studies in Complex Choices (IASCC), told Telangana Today, “Several sectors are in crisis and the public sector entities in these sectors need capital infusion for their revival. Divestment is not going to help these companies, the government or the nation. For instance, Air India will not have any takers as aviation is not going to recover until 2021. Several airlines are also sinking and in situations like these, there will be no buyer unless it’s a distress sale.”

He added, “The Central government should alternatively look at raising capital through public issues as the public sector units have a lot of credibility among the public, and they can become the shareholders of these establishments.”

Suggesting what else can be done, Sood said, if the PSUs were shrinking, they could be linked with CSIR labs or other government agencies to make them the bases for research and development, and product or platform development. The government could back their innovation and research activity with adequate funding. Else, the nation would lose the capabilities that the public sector had developed all these decades.

Sood added, “One of the prime reasons that PSUs had been suffering in India is due to the ministerial interference in board matters as well as the appointment of senior leadership team. If we start making boards and leadership teams autonomous, it will help PSUs to remain financially healthy and allow them to grow.”

Privatisation is not the only solution to bring in efficiency. Even in the US, barring energy, most of the infrastructure investment still comes from the public sector. Globally, the public sector has remained a reliable source for employment, thus has also been providing job security to many. 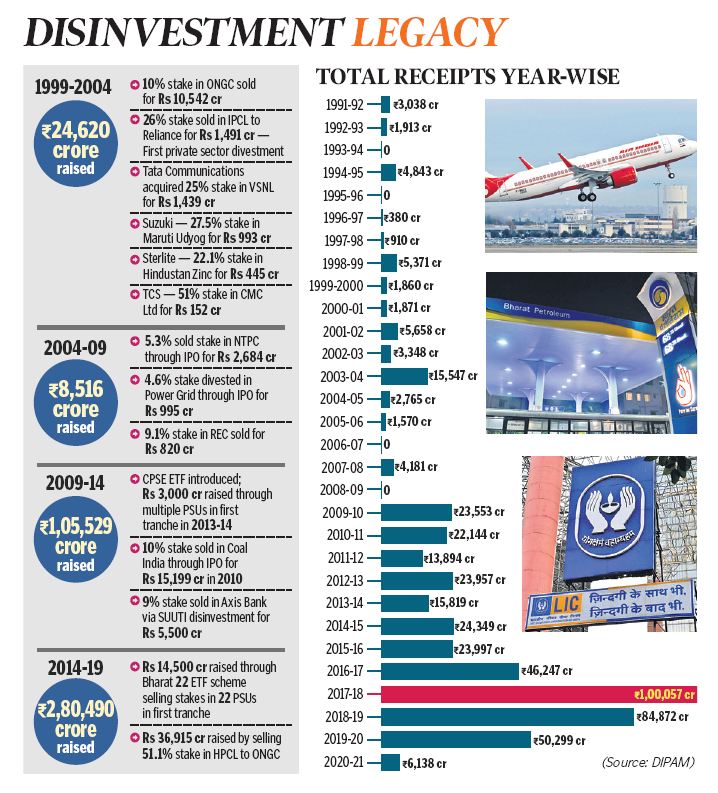