Hyderabad: There are 889 million credit and debit cards but only 4.59 million point of sale terminals till September 2019. This is an increase of 35.3 per cent over 3.39 million POS same period last year.

Between September 2018 and September 2019, there was an addition of about 11 million credit cards and reduction of about 154 million debit cards. The rise in credit cards may be attributed to the growing digital payments. The fall in debit cards is likely due to the discontinuation of magnetic stripe and the mass closure of accounts with zero balance, said Worldline India Digital Payments Report.

While the number of card transactions done at merchant locations is on the up, ATM withdrawls data suggest that cards are being used for withdrawing cash in a big way as there are no avenues to use their cards or digital instruments. However, the challenge is to move ATM withdrawals into digital payment transactions.

The report said that e-payment acceptance should not limited to deploying terminals but should also facilitate transactions through multiple modes like QR, BQR and UPI among others.

It said that payments for goods and services at physical merchant locations through a digital medium will continue to grow leaps and bounds in the coming years. However, more than 90 per cent of the transactions still are made in cash in tier 3 cities and below. The improvement will be a slow crawl. Digital payment solutions should be simple for buyers and at the same allow merchants to verify that they are receiving the monies due to them. For multiple reasons, there is an innate trust in cash and by extension distrust in digital payments, it said. 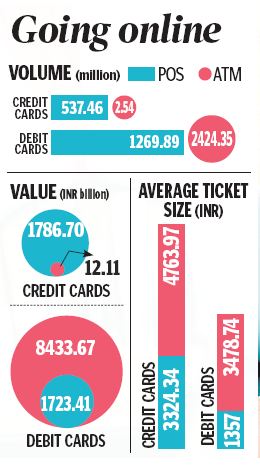 Merchants, particularly the smaller ones, should be given multiple revenue opportunities through the POS terminal or mobile. The report further said that government should incentivise the merchant acquiring industry through the Acceptance Development Fund, which the Reserve Bank of India has recently notified that it will be operationalised January next year. This will expedite the task of enabling Tier III and IV markets with acceptance infrastructure, according to Deepak Chandani, Manging Director, Worldline South Asia and Middle East, it said.

To boost the acceptance of card payments among merchants, the NPCI has revised the merchant discount rate for Rupay cards to 0.6 per cent from the earlier 0.9 per cent for transactions above Rs 2,000 with a maximum cap of Rs 150 per transaction from October this year as opposed to a higher cap of Rs 1,000 per transaction earlier. It is even lower for Bharat QR and BHIM UPI, the report noted.

It noted that despite the push from the Government to increase awareness about digital payments, cash is still king.

UPI
The total volume of UPI transactions in the third quarter saw a 183 per cent increased from 2.7 billion. The transaction value increased 189 per cent this year from Rs 4.6 lakh crore last year.

Barriers
The key hindrances to the growth of digital payments are higher cost of acceptance infrastructure, lack of financial literacy amongst smaller merchants, high propensity of households to save in case and the unorganised cash-intensive SMEs.