Economic corridors have emerged as an important tool of regional cooperation in the globalised world. One such project planned by two Asian countries – China and Pakistan – called the China-Pakistan Economic Corridor (CPEC) has constantly been in the news since 2013.

Chinese Premier Li Keqiang, during his visit to India in May 2013, had agreed to explore the possibility of setting up a Bangladesh-China-India-Myanmar (BCIM) regional forum. The two sides had also decided to consult the other parties with a view to establishing a Joint Study Group on strengthening connectivity in the region for closer economic, trade, and people-to-people linkages and to initiate the development of a BCIM Economic Corridor. The Premier then gave India a shocker by proposing a 3,000-km-long economic corridor between China and Pakistan, during his visit to the neighbouring country.

The $46-billion (original cost) CPEC, which proposes to connect China’s North Western region Xinjiang and Gwadar in South Western Pakistan, is one of the main components of the ‘Silk Road Economic Belt,’ — dubbed as Chinese President Xi Jinping’s most ambitious economic and foreign policy project. 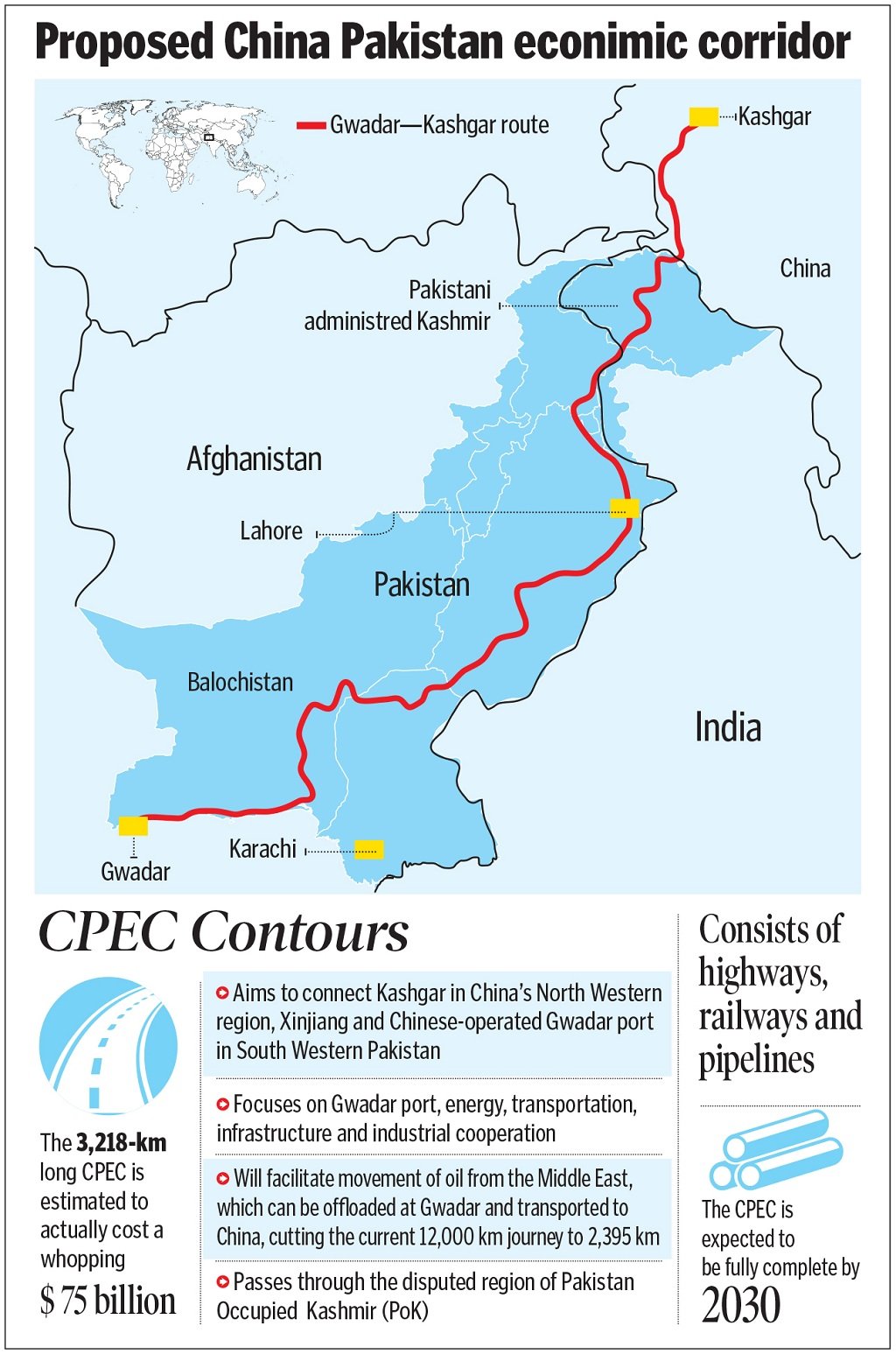 Beyond Bilateral
If implemented successfully, the CPEC will strengthen China’s relationship with Pakistan. According to Ahsan Iqbal, Pakistan’s Minister of Planning, Development and Reform, the CPEC will “turn the bilateral friendship into a strategic economic partnership”.

Keeping in view the already close relations between Beijing and Islamabad, it would be no exaggeration to expect that the economic corridor would not only strengthen economic but also military ties between the two neighbours.

The Chinese government sees hefty profits through the implementation of the project. Not only does the initiative help the country build good international relations, but it also helps China develop and modernise its landlocked and underdeveloped southern and western provinces, and enable it to access the markets of South-East Asia and West Asia.

On the other hand, Pakistan would be keen on gaining a stronghold on the Indian Ocean with the help of China.

India Wary
The substantial presence of China and Pakistan in the waters of the Indian Ocean will gradually weaken the Indian grip over the territory. India’s efforts of isolating Pakistan diplomatically for its terrorist activities, could also gradually stop having an impact internationally as several Eurasian countries trading off the Gwadar coast would be heavily reliant on the CPEC.

Moreover, the railway route planned under BRICS is expected to link Pakistan and China via Pakistan occupied Kashmir (PoK), which will be of strategic importance in the event of conﬂicts with India, and will facilitate China to supply missiles and spare parts to Pakistan. This might have serious consequences on India’s power to negotiate with China on the territory of Ladakh and further cause tension on the border.

The CPEC, which is a part of the One Belt, One Road, also passes through PoK, like the railway route planned under BRICS. According to the documents released at the Bao Forum Conference in 2015, the host country (Pakistan) will have an obligation to serve China’s interests, including strategic interests, which may sooner or later increase the military presence of China in the region.

“The CPEC passing through PoK challenges Indian sovereignty,” the Defence Ministry stated in its annual report recently. China’s presence in PoK would definitely be a huge concern for the Indian government, as the ongoing conflict between the two countries (India and Pakistan) on territorial grounds seems to be escalating with continuous cross-border terror activities and ceasefire violations by Pakistan.

With enough number of complications linked to the development of the ambitious Chinese project, New Delhi can only be wary.

Key Concerns
Almost burying the hatchet post the 1962 Sino-Indian war, the relationship between India and China has witnessed tremendous improvement, especially in the last decade or so. Though both the countries are keen on enhancing bilateral ties, the issue of the Ladakh border remains. While China seems to be showing interest in working with India on several projects, including the recently-established Asian Infrastructure Investment Bank, the latter is worried about the former’s probable aim at gaining a military advantage at PoK with the establishment of the CPEC. Experts and strategists point out that China will not only look to develop trade but also try to contain India by gaining power and control across the corridor.

Pakistan will look to resolve the conflict with the provinces it acquired almost forcibly – PoK, Balochistan, Gilgit-Baltistan – by dangling profits that could be gained by the implementation of the CPEC. It is no secret that the majority of these forcibly acquired areas, especially Balochistan, looks up to India for help in its freedom struggle against Pakistan.
As there seems to be no copy of the agreement made in 1949 by Pakistan and the then so-called Azad Kashmir government stating that the former has legal rights over Gilgit-Baltistan, India could have capitalised on this to ensure good relations with the region, which would come in handy in the long run.

However, with the CPEC set to commence, chances of India gaining the trust of Gilgit-Baltistan have become bleaker. This could also mean that the Chinese military and government could gain a stronghold over the corridor, which passes through the region and also impact the Chinese movement on the Ladakh border. This poses a serious threat to security of Jammu & Kashmir.

Get Involved
Since all the countries of the sub-continent are excited about the project, there is little India can do about the establishment of CPEC. Pressure from India to scrap the project is unlikely to work.
In such a scenario, non-participation in the project may lead to isolation, which the government certainly wouldn’t want. New Delhi also cannot ignore China, the second largest economy in the world.

India’s focus on Asian regionalisation may be badly dented if it chooses to turn its back towards the project and boycott it. Keeping this in view, New Delhi must act quick and try to be a part of the project by having talks with Beijing and Islamabad. A successful trilateral project would also mean that India, which is strategically located on the corridor would benefit, as a result of burgeoning trade with West Asia or Africa.

The CPEC will come into existence sooner or later. The best thing for India to do at this juncture is to get involved in the project and reap benefits out of the massive Chinese investments.
This approach will also help India keep a close watch on Chinese military gaining foothold in the disputed region of PoK and Gilgit-Baltistan. Several strategists have pointed out that this would be much simpler if India chooses to be a part of the project. India needs to take the right call