Hyderabad: The Union government’s outright rejection of the long-pending demand for the establishment of a Turmeric Board in Nizamabad may well blow up on the BJP’s face with the move triggering widespread protests by turmeric farmers in the State even as TRS MPs took the Centre to task in Parliament on Tuesday.

The issue snowballed into a major controversy when the Centre reiterated its decision again in the Lok Sabha on Monday. The TRS MPs made a strong pitch for the board in Nizamabad, while turmeric farmers in the State burnt effigies of the Central government and Nizamabad MP D Arvind in protest against the rejection and demanded the MP’s resignation since he had failed to fulfil his major electoral promise.

Union Agriculture Minister Narendra Singh Tomar had announced in the Rajya Sabha on Monday that there was no proposal for setting up the Turmeric Board, which met with strong opposition both in the Parliament as well as in the State on Tuesday. The issue was raised by TRS Lok Sabha floor leader Nama Nageshwar Rao and Congress MP N Uttam Kumar Reddy separately during Question Hour in the Lower House, questioning the Centre’s indifference to protect the interests of turmeric farmers and the reasons for not setting up the board.

In his reply, Union Agriculture Minister Narendra Singh Tomar said the Centre had upgraded its divisional office at Nizamabad to a Regional-Office-cum-Extension Centre in February last year under Spices Board for promotion of turmeric as well as other spices with focused attention on research, development, post-harvest operations, marketing and export in the region.

He stated that several development programmes were being implemented for spices under the Mission for Integrated Development of Horticulture (MIDH) including the establishment of the new garden (area expansion), micro-irrigation, organic farming, creation of water resources, post-harvest management, development of market yards and human resource development among others to enable farmers to get remunerative prices for turmeric crop.

Union Minister of State for Agriculture Purushotham Rupala, filling in for his senior, said the regional office of Spices Board was already handling nearly 50 spices including turmeric and that there was no need for a separate Turmeric Board. With regard to the Market Intervention Scheme (MIS), he said the Central government would approve it if the State government sends a proposal. He sought to push the blame on the State government for the Centre’s inaction claiming that there was no proposal seeking MIS for turmeric from Telangana. 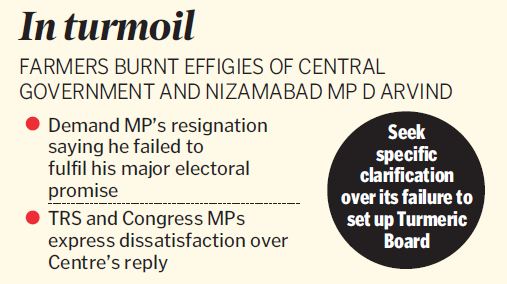 However, the TRS and Congress MPs expressed dissatisfaction over the reply and sought specific clarification over the Centre’s failure to set up a Turmeric Board. They pointed out that the regional office of Spice Board in Nizamabad was only providing export licences, and that a dedicated Turmeric Board could deal with all problems faced by farmers and provide necessary support in terms of cultivation and exports.

He said Union Ministers Rajnath Singh and Prakash Javedkar had given specific assurance while campaigning for BJP candidates during the last Lok Sabha elections in Telangana State that a Turmeric Board would be set up. “We will continue to take up the issue in Parliament in the coming days and if the Centre fails to relent, we will decide the future course of action,” he said.

Meanwhile, Arvind, speaking to the media in New Delhi, virtually washed his hands off the issue with the claim that the BJP government was taking all measure in the best interests of turmeric farmers.