A gigantic container ship ran aground and blocked the Suez Canal for a week recently. It was an extraordinary event as nothing of the sort had happened before in the canal’s 150-year-old history. One of the toughest salvage operations in modern history was needed to get the colossal ship back to the water and end a crisis that had clogged one of the world’s most vital waterways and cost billions of dollars a day in maritime commerce.

A flotilla of tugboats, helped by the tides, wrenched the bulbous bow of the skyscraper-sized Ever Given from the canal’s sandy bank. The Ever Given, a Panama-flagged ship that carries cargo between Asia and Europe, got wedged on March 23 in the narrow, manmade Suez Canal dividing continental Africa from the Sinai Peninsula while carrying 18,300 containers. (See Infographics).

At least 367 vessels, carrying everything from crude oil to cattle, were held up, while dozens took the alternate route around the Cape of Good Hope at Africa’s southern tip — a 5,000-km detour that adds some two weeks to journeys and costs ships thousands of dollars in fuel and other costs. Egypt has already lost over $95 million in revenue, said data firm Refinitiv.

The Ever Given, built in 2018, is among the largest 1% of the world’s fleet. Container ships have been increasing in size for decades to carry more containers. One of the significant size upgrades came when Maersk introduced its E-series in 2006 to carry around 15,000 containers – doubling the capacity of container ships. In the 15 years since then, some 133 ships have been launched with a carrying capacity between 18,000 and 24,000 containers. These are classed as ultra large container vessels – the biggest boats in the world, writes Evangelos Boulougouris, Professor, Naval Architecture, Ocean and Marine Engineering, University of Strathclyde, in The Conversation.

“Operating megaships in confined waterways has already been shown to be difficult. Stacking them high with containers doesn’t help: it can lead the vessels to catch the wind and become even harder to control, which may have played a role in the Ever Given’s grounding. When caught in a storm on open seas, such ships may also be more prone to losing containers overboard,” says Boulougouris.

The unprecedented shutdown of the Suez Canal has also prompted new questions about the shipping industry, an on-demand supplier for a world under pressure from the pandemic. “We’ve gone to this fragile, just-in-time shipping that we saw absolutely break down in the beginning of Covid,” says Capt John Konrad, CEO of the shipping news website gcaptain.com. “We used to have big, fat warehouses in all the countries where the factories pulled supplies. Now these floating ships are the warehouse.”

The Suez Canal is the gateway for the movement of goods between Europe and Asia. About 12% of global trade goes through it but it accounts for 30% of the world’s daily shipping container freight. Some 19,000 vessels passed through the canal last year. Famed shipping journal Lloyd’s List estimates each day the Suez Canal is closed disrupts over $9 billion worth of goods. A quarter of all Suez Canal traffic a day comes from container ships like the Ever Given, the journal points out.

“Blocking something like the Suez Canal really sets in motion a number of dominos toppling each other over,” says Lars Jensen, chief executive of Denmark-based SeaIntelligence Consulting. “The effect is not only going to be the simple, immediate one with cargo being delayed over the next few weeks, but will actually have repercussions several months down the line for the supply chain.”

When it comes to shipping goods from Asia to Europe, there are virtually no alternatives such as rail or truck transportation, points out Sharat Ganapati, an economics professor at Georgetown University. Any blockage will delay a range of parts and raw materials for European products such as cotton from India for clothes, petroleum from the Middle East for plastics, and auto parts from China.

“The fact that you have the most pivotal node in the trading network being blocked is going to have important welfare effects around the world,” says Woan Foong Wong, an economics professor at the University of Oregon. Nearly 10% of oil shipments and 8% of global liquid natural gas moves through the Suez Canal. Much of the traffic involves transportation of crude oil from the Middle East to Europe and the US. It’s also an important link for Russian oil to Asia.

William Lee, chief economist at the Milken Institute, points to the semiconductor industry as an area especially vulnerable to disruptions from shipping delays. Companies in Europe often get the components they need to make computer chips from suppliers in Asia.

“The shortage of semiconductors right now is so severe, that kind of delay in supply, even by a week or two, could also lengthen the delays in semiconductor production, which has stalled automobile and other electronics’ production. It’s a wake-up call for companies that have set up their business to rely on supply chains with little room for error… This is a warning about how vulnerable our supply chains are and how the just-in-time inventory techniques that have been so popular have to be rethought,” says Lee. 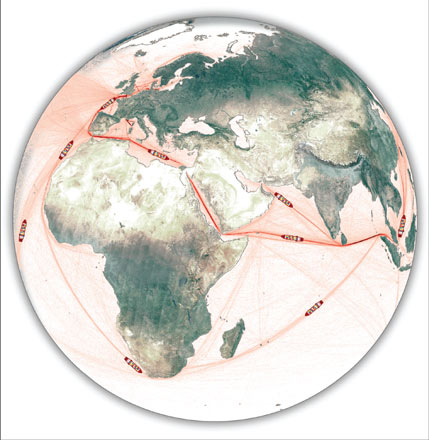 A manmade waterway, it connects the Indian Ocean, the Red Sea and the Mediterranean. It is almost 200 km long, starting from Port Said on the Egyptian territory of the Mediterranean Sea, close to the city of Suez. It separates the Bulk of Egypt from the Sinai Peninsula.
Opened in 1869, the Suez Canal provides a crucial link for oil, natural gas and cargo. In 2015, the government of President Abdel-Fattah el-Sissi completed a major expansion of the canal, allowing it to accommodate the world’s largest vessels.

It connects the Atlantic and Pacific oceans through the narrow Isthmus of Panama. Completed in August 1914, it is one of the two most strategic artificial waterways in the world, the other being the Suez Canal. Ships sailing between the east and west coasts of the US, which otherwise need to round Cape Horn in South America, shorten their voyage by about 15,000 km by using the canal.

The Danish Straits, a series of channels that connect the Baltic Sea to the North Sea, are an important route for Russian seaborne oil exports to Europe. Russia shifted a significant portion of its crude oil exports to its Baltic ports after opening the port of Primorsk in the Gulf of Finland in 2005.

It unites the Black Sea and the Sea of Marmara and separates parts of Asian Turkey (Anatolia) from European Turkey. An international commission assumed control of the strait after the Ottoman defeat in World War I. Turkey resumed control in 1936.

Links the Persian Gulf (west) with the Gulf of Oman and the Arabian Sea (southeast). The strait is 55 to 95 km wide and separates Iran (north) from the Arabian Peninsula (south). It is of great strategic and economic importance, especially as oil tankers collecting from various ports on the Persian Gulf must pass through the strait.

The strait connects the Red Sea (northwest) with the Gulf of Aden and the Indian Ocean (southeast). With the building of the Suez Canal, the strait assumed great strategic and economic importance, forming a portion of the link between the Mediterranean Sea and East Asia. Its Arabic name means “the gate of tears,” so called from the dangers that formerly attended its navigation.

Connects the Andaman Sea (Indian Ocean) and the South China Sea (Pacific Ocean). It runs between the Indonesian island of Sumatra to the west and peninsular (West) Malaysia and extreme southern Thailand to the east and has an area of about 65,000 square km. As the link between the Indian Ocean and the South China Sea, this is the shortest sea route between India and China and hence one of the most heavily traveled shipping channels in the world.

This rocky promontory at the southern end of Cape Peninsula, South Africa, was first sighted by the Portuguese navigator Bartolomeu Dias in 1488 on his return voyage to Portugal after ascertaining the southern limits of the African continent. One historical account says that John II of Portugal renamed it Cape of Good Hope (because its discovery was a good omen that India could be reached by sea from Europe) (Sources: Britannica, eia.gov)

In 1956, Egypt’s then-President Gamal Abdel Nasser nationalised the canal. The seizure, celebrated by Egyptians as a defiant break from European imperialism, prompted Britain, France and Israel to intervene militarily and occupy the canal zone. As fighting raged, sunken ships sealed off the canal for months. The United States and the Soviet Union, which openly opposed the invasion, ultimately forced the three countries to withdraw. Egypt was able to reopen the canal in March 1957, in what was seen as a victory for pan-Arab nationalism.

At the outbreak of the 1967 Mideast war, Egypt closed the canal to international shipping as Israeli forces struck at the canal zone and entrenched in the Sinai Peninsula. This time, the canal was shut for eight years. Accumulating mines, bombshells and sunken vessels, the waterway became a fortified trench in the war. It was only after peace talks with Israel that Nasser’s successor, Egyptian President Anwar Sadat, reopened the waterway in 1975. The closed canal cost the world $1.7 billion in lost trade and Egypt $250 million in lost toll revenues annually.

The shutdown forced Europe-bound vessels to avoid Suez by rounding the southern tip of Africa, encouraging shippers to find economies of scale by developing increasingly large supertankers — a trend that, ironically, led ships to swell to the size of the stranded Ever Given.