A factor communication depends on is the level of fear. Fear is the volume controller. It controls the sound. People in Hong Kong, now in a revolutionary movement, have less fear and loud volume. They are speaking loud because they are fearless. In contrast, people of North Korea cannot speak. Are they subalterns? No. Either subaltern or non-subaltern, it does not make a difference. Low-profile employees cannot speak in front of a high-profile boss. Subalterns are low-profile people. 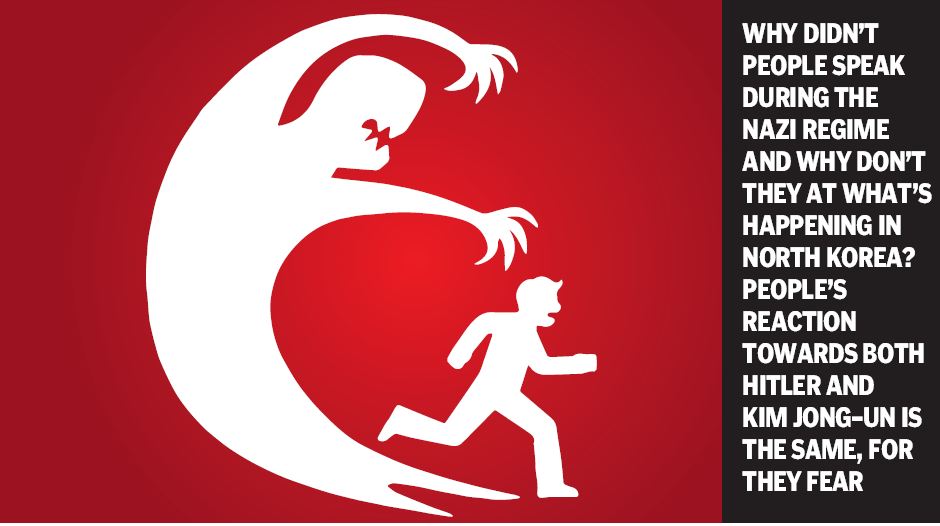 Jacques Derrida says, “Rendering delirious that interior voice that is the voice of the other in us.” The Philosophy of Fearism doesn’t agree with Spivak, Foucault and Derrida. It follows the radical path, which is more practical and logical.

In ‘Merchant of Venice’, Portia told Shylock, “you can take flesh from Antonio but be careful; you are not allowed to drop a blood because it is not mentioned in the contract.”
Spivak’s essay is close to the play because everything is in the periphery of fear but the fear is totally effaced. What constituted the structure of self-immolation of the Sati system? Fear leads them to self-immolation and into the pyre of the deceased husband. No one wants to die in the name of the deceased husband. Widows are afraid to sit on the pyre but there is a strong fear beyond the pyre — fear of society. It is true; women are mostly used as a scapegoat in the name of religion and culture because they are considered physically and mentally weak. Weakness is the pandora of fear.

Fear mutes the sound of many. Suppose a child confronts rude parents, that child never speaks. But when parents urge the child to speak without fear, that child can speak without any interpreter. It is also applicable to husband-wife. In most countries, the wife is in the position of subaltern and husband is in an elite position.

I feel uncomfortable with the colonial word ‘Subaltern’. I suggest the use of ‘Fear Sapiens’. It is more conceptually moderate than subaltern. When do lions stop roaring? When they are afraid, they keep quiet and hide. It is not merely for ‘Fear Sapiens’, it happens in the case of non-subalterns too. Why can’t they speak? Why this question is imposed on oriental and the third world? Why is it not imposed on the occident? Can all the occidentals speak?

Looking at natural composition, one will understand that “human beings are the same”. Why is there prejudice and what is the reason for this prejudice? The word subaltern is dominating with rhetoric like slave, untouchable, and scheduled caste. These words carry the meaning of fear. They are synonyms or binary of fear. The word is formally or informally a production of occidental — same as the first, second and third worlds. It is not in favour of the so-called subaltern. The best word for it is hegemony or ‘Fear Sapiens’. This word makes double colonial — firstly colonial by occidental and secondly by the word.

The exact meaning of subaltern refers to a junior officer in the military. The so-called subalterns are not junior people in society. Why did someone make this derogatory word popular? If someone said to someone, “you are a slave, untouchable, schedule caste, marginal, poor, black, disabled” — it pours scorn, dishonour and creates inferiority, shame, defame, etc. Over a period of time, it changes into a discipline. Fear Sapiens have been living in a fearful world for 3,000 years. Since there is a mix-up in blood, prestige, ideology, belief and religion, how can they speak?

I read in a newspaper that a high-profile man sexually harassed women staff for 35 years, but nobody spoke against him because they feared being fired. Such cases can been seen every day.

Why didn’t people speak in the Nazi regime? Why don’t they speak up at what is happening in North Korea? People’s reaction towards Hitler and Kim Jong–un is almost the same – they fear. Even to plant a sapling needs free space. ‘Fear Sapiens’ are human beings – they need to grow, speak, sing, dance and be happy, they need a fearless world. Fear is the shackle holding them captive.

Even in Europe or America, when a rape happens, the first instinct is to hush it up. They don’t want to publicise it because they fear losing status, family, and reputation. The so-called subalterns have a high degree of fear.

The word subaltern was first used by Antonio Francesco Gramsci and later by Ranajit Guha. But did the strategy of Derrida and Foucault do good justice? No. It is not the way to make people speak.

‘Fear Free Zone’ is the accurate place for trial. In that zone, there will be no entry of excommunication, banishment, confinement, physical violence, domination, boycott and discrimination in the name of tribe, race, culture, caste, religion and continent. In the ‘Fear Free Zone’ they will not only start to speak, but will also begin to shout. Being fear-free is a must for being humanitarian as well as for equality.

(Desh Subba is the author of ‘Philosophy of Fearism’)