The phrase ‘Performance art’ is an interesting term as it is a form of live art that most people don’t know much about and it is often confused with ‘performing arts’. A cursory Google image search throws up hundreds of images of artists in various postures and props, exhibiting themselves as the artwork as opposed to an artwork created by them. So, what exactly is performance art and how does it differ from performing arts? 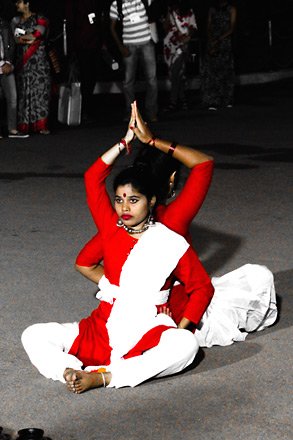 Performance art can take any form as there is no defined standard for it, just like an installation art that utilises a given space to achieve the desired art. “Just the way theatre is more fluid compared to dance, as it doesn’t necessarily have a form, I believe performance art is also fluid. There can be elements of any art form in performance art or even nothing,” explains Pallavi.

Also, a performance art doesn’t usually involve any rehearsal or preparation as it is equally based on the audience’s response as it is on the artist’s creativity. For instance, there is an internationally renowned European performance artist named Marina Abramovic and her art experiment ‘Rhythm 0’ was a six-hour-long performance that involved the artist in a passive role and the audiences were asked to do whatever they wanted to with the artist using any of the 72 props that were available there. It was an experiment to explore what an audience would do to a passive performer who would not offer any resistance to anything that’s being done. It depended entirely on the audience’s response.

As far as performance art in Hyderabad is concerned, it is still in a nascent stage compared to the thriving art scene that exists in this city. There are few performance artists like Sastry here, and he says, even he is in an experimental phase as far as the art form is concerned. “I came to know of it recently when I met a performance artist from Chennai. She had done something called ‘Because of You’ where she went around the Marina Beach giving tiny mirrors to people littering there and asked them to stick the mirror onto her. In the end, her body was covered with mirrors and, in a way, it reflected the people back to themselves and the message was that the beach was dirty because of them. I found this interesting and, later, I did a performance art piece on menstruation that I called ‘Patra’,” says Sastry who, at the end of the performance, invited everyone to pour red water into a cup to spread awareness on the usage of a menstrual cup.

“I am still in the learning phase and I really want to have more such performances in the future. But, the problem is, performance art is most effective if done at a public place but getting permissions becomes difficult generally. Artists are usually reluctant to get these done and that’s probably one reason why performance art is not growing as fast as other art forms,” he adds.