Hyderabad: Imagine living on a monthly pension of Rs 1,250 after retirement that too from contributions from hard-earned made through the years!

This is exactly what the BJP government at the Centre doles out to retired people on an average in the form of pension. It is not willing to come to the rescue of pensioners and facilitate a dignified life despite courts asking the government to increase the pension.

In fact, Telangana, under the leadership of Chief Minister K Chandrashekhar Rao, provides far better pensions under the Aasara scheme, to various sections of people, ranging from Rs 2,016 to Rs 3,016. The old-age pension in Telangana used to be a measly Rs 75 per month which was increased to Rs 200 by the Congress government. After the State formation, the TRS government increased it in a phased manner to the present levels.

The haughty BJP-led Union government, however, is in no mood to listen to the people and courts. It refuses to increase the pension commensurate with the savings of employees under the Employees’ Pension Scheme (EPS), which was started in 1995.

According to available data, 40 lakh pensioners out of the total number of 64 lakh pensioners in the country are receiving a pension of Rs 1,000-1,500 per month. Very few get Rs 7,500, the highest slab. Unable to survive on the meagre pension, several pensioners are getting into legal battles seeking pension commensurate with the amount that they had saved in the EPF during their period of service. The Centre, which had taken up a review of the demand for higher pension, mysteriously discontinued the exercise. 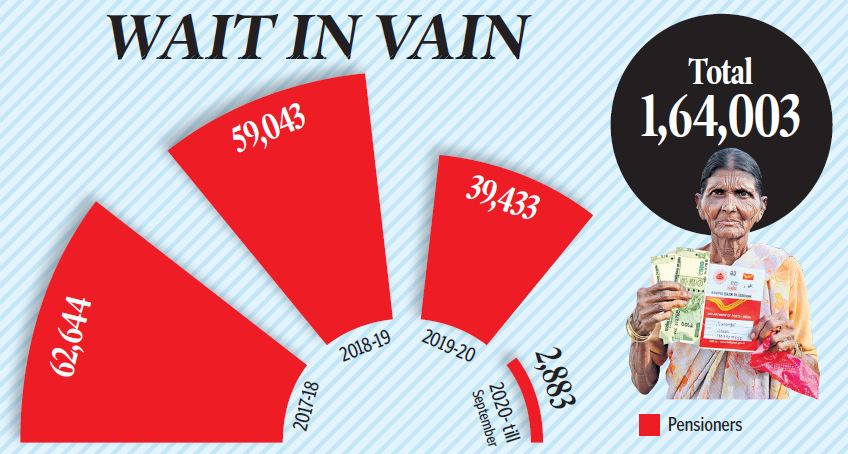 While the issue has been dragging on for years, the present BJP government, which has waived huge loans taken by industrialists pushing nationalised banks into deep financial crisis, did nothing to save the old pensioners from leading miserable lives. It was estimated that a pensioner has to wait for at least seven years to receive justice.

When the pensioner is not paid what s/he saved during her/his lifetime in job, the question is where did their money go? The nominee receives 50 per cent of the accumulated amount of the deceased pensioner and the EPF retains the remaining part. It is reported that a whopping Rs 54,658.86 crore of unclaimed EPF amount is also lying with the EPFO as on March 2018.