The youngest State can take pride in the fact that this has been the biggest and quickest turnaround in the power sector in the country.  For long, the spectre of power shortages had a crippling effect on the region’s economy in undivided Andhra Pradesh, and the shadows of dark nights are still fresh in public memory. Instances where hospitals insisted on at least a single spell of assured supply in a day to reschedule surgeries postponed repeatedly for want of power were common then. Unsheduled power cuts that were the order of the day left people sweltering at homes, offices and schools.

The humming of generators had become familiar at malls, offices, marriage halls and venues of public gatherings. Flawed planning in supply and long power outages forcing closure of factories and leaving people without work are grim realities of a bygone era. 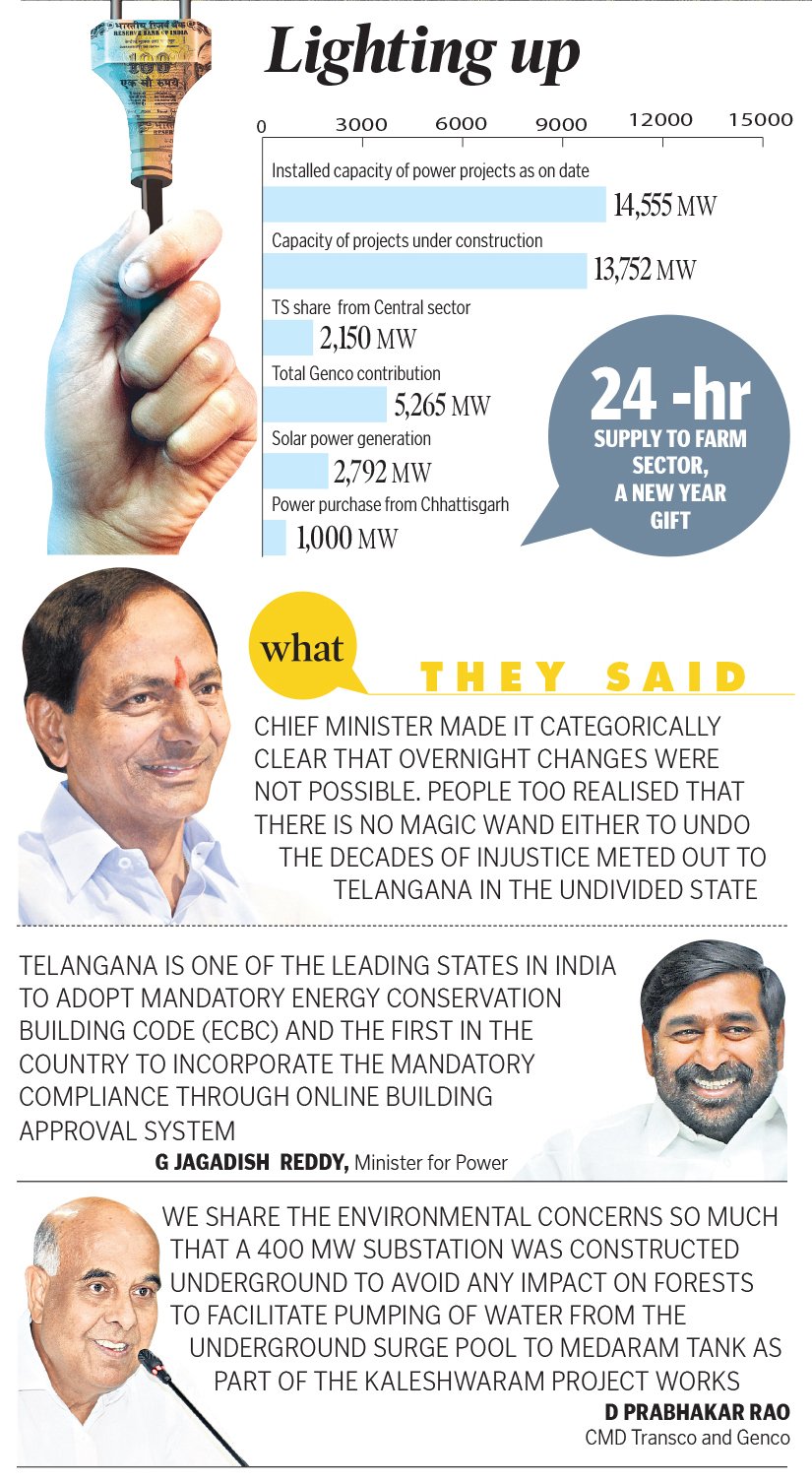 All that changed the moment the State came into being, and from the very first summer of existence, the Telangana Rashtra Samithi government made sure that the nightmare of extended power cuts became a thing of the past.

The Seemandhra rulers who predicted a doom for the Telangana power sector were not only disproved but even made to realise that their basic approach to meeting the energy needs of people was wrong. How did this happen? That has been the million dollar question.

Total installed capacity of power generation units in the State which was only 6,574 MW as on June 2, 2014, increased to 14,555 MW as of today. The projects under implementation will be adding another 13,752 MW in a couple of years, pole-vaulting a power deficit Telangana to a power surplus State.

Experts and administrators from the energy sector from across the country began analysing the factors that that helped Telangana, a State known for its power shortages to move in the direction of emerging as a power surplus State.

The success story was scripted all alone by the man who made separate Telanga State possible – Chief Minister K Chandrashekhar Rao and his vision. He began working on the master plan to meet the energy needs of the State with experts as far back as December 9, 2009, when then Union Home Minister P Chidambaram announced that the Central government would start the process of forming a separate Telangana State, pending the introduction and passage of a separation resolution in the Andhra Pradesh Assembly, says Minister for Power G Jagadish Reddy. The new born Telanagana State that identified the power sector as the catalyst for revival of its ailing industrial as well as agriculture sectors, focused its attention on issues related to infrastructure growth on priority besides power generation and distribution network that were in shambles for long. No sector was an exception to the birth pangs of the new State. The situation in the power sector in the first half of the first year of State formation was grim. Industries were subjected to one day power holiday. For a brief spell, it was increased even to two days a week.

The Chief Minister made it categorically clear that overnight changes were not possible. People too realised that there is no magic wand either to undo the decades of injustice meted out to Telangana in the undivided State.

While Andhra Pradesh was among the few States chosen by the Centre under the power for all scheme which sought to provide 24×7 power supply to all sections from October 2, 2014, Telangana was still faltering in the efforts made on its own to meet the minimum energy needs of its consumers.

Effective planning by the Energy department could help usher in a dramatic improvement by March 2015. The demand continued to be almost the same and the government, thanks to its contingency plans, succeeded in ensuring continuous power supply to the industrial sector right from the summer of 2015. The government purchased 1,050 MW on daily basis from power surplus sources to augment the supply and coinciding with this, there was a dip in demand because of the new cropping pattern that facilitated a marginal shift from water intensive paddy to commercial varieties. There was no big relief in sight from generation side.

But effective monitoring and planning helped in increasing the plant load factor (PLF) of thermal units from 74.46 per cent to 80.3 per cent within one year, thus adding to the generation by about 1,200 million units. The transmission and distribution losses were also brought down from 17.54 per cent to 16.32 per cent during the period.

Despite the improvements effected by the TSGENCO in three years, the ageing thermal units which had outlived their expectancy remained a handicap. There were environmental concerns and they needed to be phased out. The TS Genco is planning closure of such units in the months to come once the new units under construction are commissioned. Some units in Kothagudem Thermal power stations have been identified for the purpose.

In a bid to block the paths to suicide, the State has focused all its attention on making the peasants a lot more happier than the rest. Their well-being is considered as paramount importance for the resurgence of the rural economy. Two major initiatives from the government this year are expected to raise their happiness quotient in the coming months. 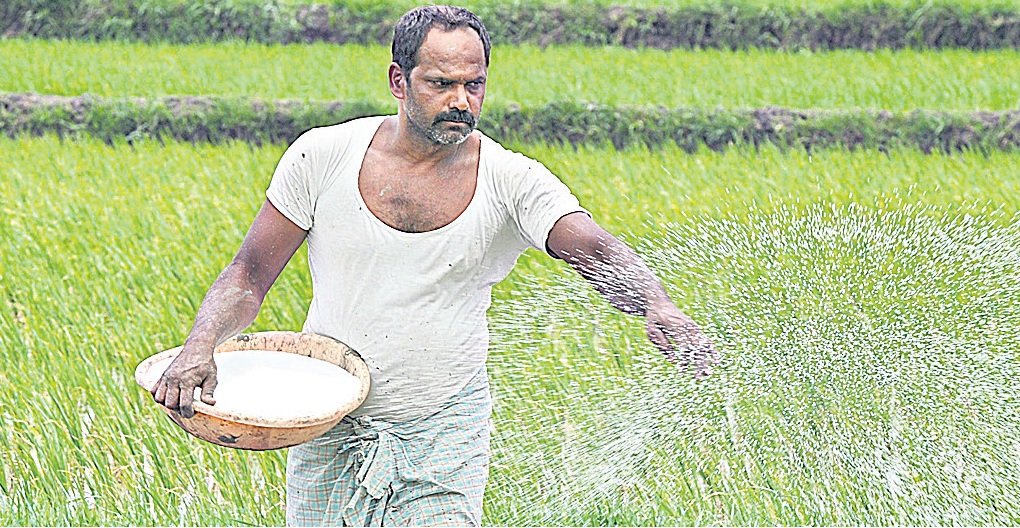 In a first of its kind in the country, the farmers of Telangana State are assured of round the clock free power supply. The 24×7 free and quality power supply which was successfully tried out all over the State in November, will be rolled out in a full-fledged manner as a new year gift on January 1.

The peasant community which erupted in celebrations following the announcement of Rs 8,000 per acre annual assistance to facilitate farmers meet crop investment, welcomed the free power decision also with loud cheers all over the State. The power utilities invested over Rs 12,000 crore to strengthen the distribution and supply systems to facilitate the round the clock power supply to the farm sector. About 23 lakh agriculture pump sets are in use in the farm sector.

“Telangana farmers had suffered a lot under the united AP regime for the lack of power supply. They were not getting even 3 to 4 hours of supply. Though major part of cultivation in the Telangana region was dependent on borewells, the then governments neglected the issue. The day I became the Chief Minister, I decided to change this situation,” Chief Minister K Chandrashekhar Rao said of his decision.

The 24-hour power supply will cost the State exchequer Rs 617 crore additionally. It would be paying Rs 5,770 crore towards the subsidy component per annum as against Rs 5,684 crore being paid so far to the power utilities.