On 14th April 2021, President of the United States of America Joe Biden said his country “will be out of Afghanistan before we mark the 20th anniversary of that heinous attack on September 11th”.

Biden also stated that he would not like to “pass” the responsibility of withdrawing from Afghanistan to the next US President. It is to be noted that former Presidents Barack Obama and Donald Trump had also promised a drawdown from Afghanistan, but none succeeded.

Biden appears firm in his position; the question is: will the situation permit the US to withdraw completely from Afghanistan. Looking at the spurt in terror attacks in the last few months and the growing clout of the Taliban, many Afghan experts are uncomfortable with the idea of complete US withdrawal at this juncture.

According to the Global Terrorism Index, in 2020, Afghanistan topped the list and was placed in the category of “being in a state of war”. The problem in Afghanistan is evident. During 2018-19, “Afghanistan accounted for 41% of deaths from terrorism globally, with the Taliban being responsible for 87% of these fatalities”.

While participating in the peace process, the Taliban has not renounced violence and used it to strengthen its bargaining position. The Taliban never accepted the legitimacy of the elected Afghan governments and stood opposed to the constitution. Moreover, the Taliban is firmly backed by the Pakistani military establishment; the latter has its own strategic calculations. All these are not a good indication for Afghanistan and South Asia.

There are credible reports that add to the apprehensions regarding Afghanistan and raise serious doubts on the optimism of Biden. For Biden, the elimination of Osama bin Laden and the decline of the Al-Qaeda are signs that the US achieved its goals in Afghanistan. Laden is dead and Al-Qaeda is weak, but there are other equally worrying challenges in Afghanistan. Let us look at the United Nations Security Council (UNSC) report of February 2021. This report has a section on South Asia, and Afghanistan has a special reference.

The UNSC report underlines the deteriorating security situation in Afghanistan despite efforts to negotiate peace with the Taliban. It also mentions that Islamic State is making efforts for its revival in Afghanistan, and not much has changed in the old relationship between the Taliban and Al-Qaeda. This report is an eye-opener. There are political cross-currents in Afghanistan, and it is difficult to predict the future of the country.

Afghanistan was a peaceful and progressive country, and things changed after the undue and illegal interference of the erstwhile Soviet Union in the country (1979). During the Cold War, the Soviet invasion of Afghanistan allowed the USA to assist Afghan rebels with the help of Pakistan. Pakistan and the USA gave the fight of Afghans against the Soviet invasion a religious colour. It became a fight between infidel communist and Islam, and Afghan rebels were termed as ‘Mujahideen’ (Muslim who fight on behalf of the faith).

In this critical moment of the Cold War, Pakistan’s military dictator General Zia-ul Haq provided all possible help to the Afghan ‘Mujahideen’, like giving them refuge, material support, and most importantly, required military training to face the Soviet army. The US backed every move of Pakistan in assisting ‘Mujahideens’.

The Soviets lost in Afghanistan and started withdrawing in 1988. Thus, the USA won this war, and Afghanistan literally became a Vietnam of the Soviet Union. 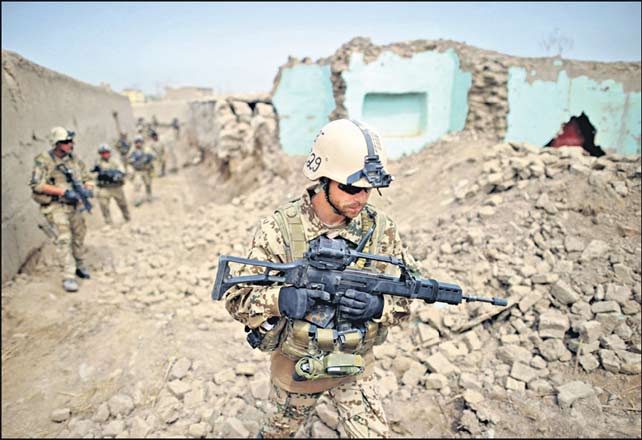 This decade-long civil war largely destroyed Afghanistan, but the USA got busy in its post-Cold War political-economic projects in other parts of the world. Slowly Afghanistan slipped into a deadly civil war. The bloodbath during the civil war period, and even gruesome violations of human rights by the Taliban in Afghanistan, had not disturbed the sole superpower of the post-Cold War era. Needless to mention that the US always projects itself as a custodian of liberal political values and defender of human rights.

Meanwhile, war-ridden Afghanistan emerged as a haven for international terrorists. The USA failed to assess the destructive potential of a lawless country that was largely under the control of an orthodox and fundamentalist militant organisation Taliban that Al-Qaeda aided. The 9/11 commission report of the USA acknowledges this intelligence fiasco.

The USA re-entered Afghanistan after the 9/11 terrorist attacks with several promises. While declaring the US war against Al-Qaeda and Taliban, former US President George W Bush had promised a better future to the people of Afghanistan. When the present US President, Joe Biden, is determined to follow a time-based and not a condition-based approach for withdrawal, what will happen to the promise of Bush?

Let us also not forget that form 2001 to around 2006, the international forces were military dominating in Afghanistan, and the Taliban was retreating. The US would have consolidated the early gains in Afghanistan. However, it was the US that opened another front in Iraq in 2003. The US and its all-time ally, the United Kingdom, on a false ground that Iraq possesses weapons of mass destruction, attacked the Gulf state.

The war in Iraq diverted the US attention from Afghanistan. The Taliban utilised it, regrouped, and from 2006 onwards started gaining ground in Afghanistan. Moreover, in all these years, the US remains clueless about dealing with Pakistan that is a mentor, saviour and, in many respects, handler of the Taliban. In short, what the Taliban said about the US is now proving correct — “you have watches, but we have the time”.

To conclude, this drawdown from Afghanistan is certainly not appreciated by many, including common Afghans. Biden claimed that the US has other serious challenges to counter, like asserting China, and exit from Afghanistan shall not be viewed as a setback for the US. The opposite is true. Complete exit from Afghanistan without ensuring real “enduring freedom” will be read as the US failure.