Hyderabad: Tipplers in Telangana, who ditched beer for the warmer whiskey and rum following the scare that one could get infected by novel coronavirus if they had chilled stuff till recently, have now returned to their favourite brew with the scorching summer sun sending temperatures soaring across the State.

Telangana is predominantly a beer market throughout the year. With cold being counted among the symptoms of Covid-19, beer sales took a hard hit in the Covid year. Many tipplers, who earlier went home with more than one bottle of beer, completely avoided it, fearing that they might catch a cold after drinking the chilled beverage.

When liquor shops reopened in May last year after a break of around 45 days following the lockdown, shop-owners anticipated brisk sales of beer during the peak summer last year. However, much to their chagrin, people preferred whiskey to beer. As there were only few takers for beer, owners slashed their indents for beer stocks from the Telangana State Beverages Corporation Limited, which supplies liquor.

But after the day temperatures started rising in the last few days, beer sales have shot up in the State. For instance, as many as 28.05 lakh cases and 22.55 lakh cases of beer were sold in January and February 2021 respectively.

But in March around 29.59 lakh cases were sold and this is the highest number of sales since the reopening of liquor shops in May 2020, beer suppliers said, adding that in May, it may cross 40 lakh cases.

M Kameshwara Rao of Association of Liquor and Beer Suppliers of Telangana (ALBST) told Telangana Today that the sales might increase further from mid-April. 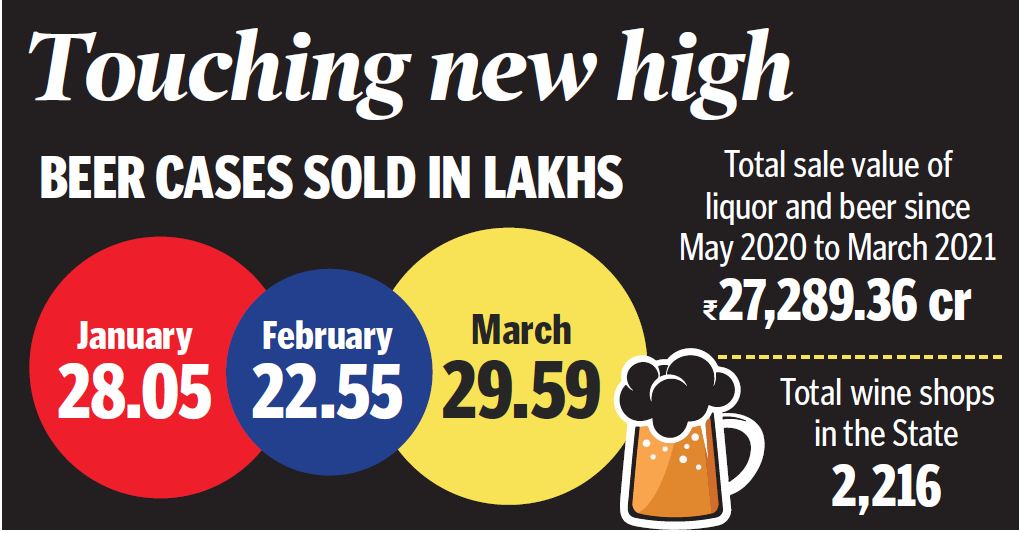 Several consumers expressed displeasure over the Prohibition and Excise Department saying that the high cost of beer was restricting them from purchasing more than one bottle.

The cost of the most sought-after Kingfisher light beer is now Rs 150 while Kingfisher strong is Rs 160 while Budweiser costs Rs 210.

The State governments in Karnataka, Kerala and Rajasthan imposed Covid cess on liquor but later withdrew it. The government in Uttar Pradesh is giving subsidy. However, the high cost of beer in Telangana is restricting consumers from buying additional stock.

The members of Association of Liquor and Beer Suppliers of Telangana have already submitted a representation to Chief Secretary Somesh Kumar requesting that the beer cost be reduced.