Hyderabad: Public sector Bharat Dynamics Limited (BDL), under the Ministry of Defence, headquartered at Hyderabad has turned 50. It was established on July 16, 1970, to be the manufacturing base of the guided missiles and allied defence equipment to meet the requirements of the Indian Armed Forces.

Prior to this, India was importing from other countries. Though even today, India continues to be one of the largest defence importers in the world, the quantum of import has reduced as a few of the defence equipment are being manufactured by BDL, said Commodore Siddharth Mishra (Retd), Chairman and Managing Director, BDL.

According to him, the SS11B1 was the first missile manufactured on Indian soil by BDL in the early 70s in technical collaboration from Aerospatiale of France. The missile is not in the current product range due to advancements in technology and modernisation of armed forces. It started production of second generation MILAN Anti-Tank Guided Missile, also in technical collaboration with MBDA, France, at its Kanchanbagh unit in the city, the company’s first manufacturing unit.

The Integrated Guided Missile Development Programme, a brainchild of Dr APJ Abdul Kalam, launched during the late 80s, gave BDL plenty of opportunities to develop its skilled manpower and invest in high-end technology areas to manufacture the five types of missiles contemplated under the IGMD Programme. BDL was nominated as the prime production agency for these missiles. To commemorate Kalam’s vision, BDL will soon be unveiling his statue near the front gate of Kanchanbagh unit. 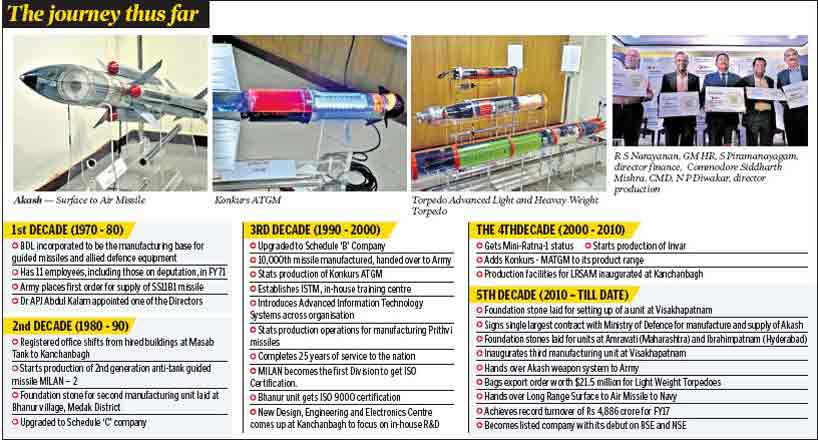 In addition, BDL has created an exclusive facility for production and testing of surface-to-air missiles (SAMs) at Ibrahimpatnam, which has a static test facility of one of its kind used for testing all kinds of rocket motors. BDL is also manufacturing the seeker (own guidance in the form of seeker) based multirole air defence missile, the MRSAM (Medium Range Surface to Air Missile), which is being jointly developed by DRDO and IAI, Israel, he said. Also, BDL has acquired land for manufacture of VSHORADs (very short range air defence systems) at Amravati in Maharashtra. This will be its fifth facility.

“We have created our own research and development unit and have come to a certain level of development of our own missile (anti-tank missile) ‘Amogha-3’, which we are planning to field by next year,” he said.

It is hoping to have an order book of Rs 25,000 crore in five years. Currently, it has orders worth Rs 8,084 crore. The company will focus on optimisation of existing production lines, increasing export and indigenisation, co-development with design agencies for new projects, offset projects and upgradation through innovation of its products, said Mishra. The current orders are to be executed by 2023-24. It is expecting orders worth another Rs 8,000 crore in two years.

Mishra further said BDL is soon going to sign an MoU with startup engine T-Hub to utilise services of various startups in the area of the company’s import substitutes and improvement of its products.

“In 2018-19 there was a de-growth compared to previous year (2017-18) wherein we have done Rs 4,586 crore. It is because of some technological issues and order book has been completed at a faster rate than incoming orders. And from this year onwards there will be growth in our turnover and that’s what we are planning,” said BDL Director (Finance) S Piramanayagam. The company has planned a capex of Rs 90 crore next year.