Hyderabad: Former Indian skipper Mohammad Azharuddin has decided to pursue legal action against some of the officials of the Hyderabad Cricket Association (HCA), including Prakash Jain, for denying him a chance to contest the last year’s election.

“I had got clearance from the BCCI but HCA officials, including Jain, wrongly told the returning officer that I was not eligible for elections. I’m contemplating legal action against these officials as I have the letters of BCCI with me. It is simple that they did not want me to fight the elections,” he said while talking to media persons here on Saturday.

Azharuddin again blasted the ‘illegal’ HCA president G Vivekanand for telling lies that he was not cleared by the BCCI.

“I have a written proof. The HCA president can’t keep telling that I have not got any clearance letter from BCCI. It is total violation of fundamental rights.”

The former Indian skipper said he had no animosity against Vivekanand or other officials. 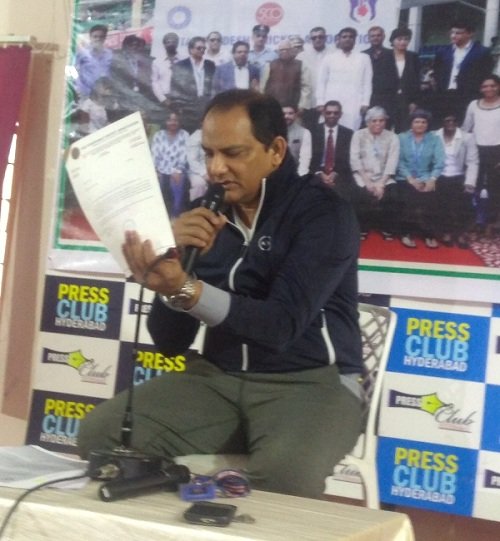 “But Vivekanand has constantly been misusing his powers. In fact, this G Venkataswamy Cup Telangana T20 tournament has no BCCI sanction and HCA has been conducting this tournament. If you see in Tamil Nadu and Karnataka, they had taken BCCI permission. But it was not done here. It is sad.”

Azharuddin said he is even planning to lead a delegation of former international and first class cricketers to Mumbai to meet the BCCI’s Vinod Rai and Rahul Johri. “We want to present our case personally. We are hoping that the BCCI will take action in due course.”

“We are hopeful of a favourable decision. I told him that it is an illegal body as they had not followed the Supreme Court orders or Lodha Reforms. According to Lodha Reforms, the elections are to be conducted by a former election commissioner not an electoral officer. I also stressed that Vivekanand is not eligible as it is a conflict of interest. He holds rank of a Cabinet Minister and he hoped the State government clarifies on this issue.”