Hyderabad: The Telangana Prohibition and Excise Department is expecting a large number of applications from liquor traders from neighbouring Andhra Pradesh this time to set up shops in Khammam, Nalgonda and Mahabubnagar districts after completion of the two-year licence period for 2,216 shops in the State on September 30. The licence rules, which are yet to be finalised by the Excise Department, will come into force from October 1.

The officials of Telangana Prohibition and Excise Department said more number of liquor traders might apply to open wine shops in three bordering districts of Telangana and Andhra Pradesh to cash in on the demand that is likely to arise after phasing out liquor shops in AP in a planned manner by the YSR Congress government.

On a pilot basis, the Andhra Pradesh government has already taken over the liquor business from the private players by opening 470 shops across the State from September 1 onwards. There will be tough competition for securing a licence for opening a shop in the three bordering districts in Telangana. Sources said the department was contemplating to increase the non-refundable application fee of Rs 1 lakh towards registration charges and there was no clarity yet whether the number of existing shops would be increased or not. 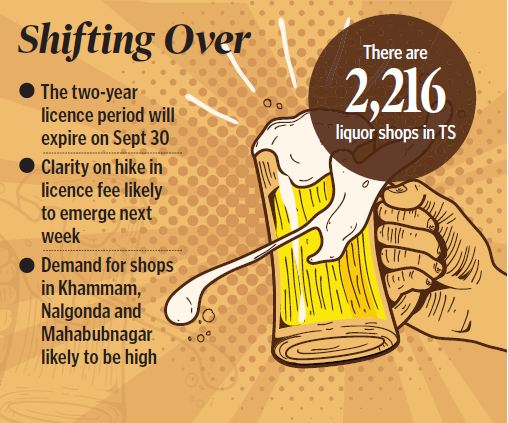 An official said clarity about the licence fee and other details would emerge by next week. Last time, the shops were allotted through draw of lots. Once the department finalises the licence fee details and other rules, a notification in the district Gazette will be issued and a timeframe fixed to enable traders submit applications to the department.

A date will later be announced to allot shops through a draw of lots at the office of District Collector concerned. Once a shop is allotted, the department will issue a list of do’s and don’ts to be followed by the owner while selling liquor.