It was in 1979 that the author Narendra went to Bastar for the first time and then encountered the somewhat back-of-beyond Abujhmad, deep in the interiors of the tribal district, where a world existed far, far away from “civilisation”, but in complete peace with itself. It had not been surveyed by any government agency. Abujhmad’s small community lived on food gathering and hunting, sheltering in tiny bamboo thatch huts. This fascinating book is a great insight into a tribal world few have dared to explore and which now, thanks to Maoists and security forces, is in the news for all the wrong reasons.

Until it was broken up in 2000 when Chhattisgarh was carved out of Madhya Pradesh, Bastar was larger than Belgium. Abujhmad itself was spread over 4,000 sq km, with impenetrable vegetation at places. But there were only 13,000 people, whose wants were few, who lived with nature, whose aggressive men wore only loincloth and whose women were bare-breasted. But they were generous, very shy and extremely graceful. 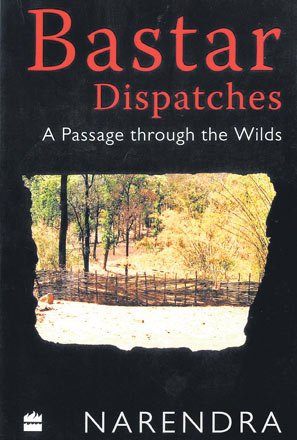 During the five years the author spent in Abujhmad, he saw no road, building, school, hospital or shops – a must for human being’s everyday existence. At the same time, there was no hunger, inequality, violence and crime. The Advisai there blended with the greenery so well that often it was impossible to spot a man or woman even from close distance. He lived with animals and rivers, trees and vines, mammoth boulders, huge ant hills and a silence totally unfamiliar to the outsiders.

Surprisingly, government schemes did more harm than good to the Adivasi’s simple way of living. He resented that he was being forced to build a toilet, instead of letting him live the way of his ancestors. The argument had nothing to do with hygiene as understood by outsiders. Similarly, in its bid to promote agriculture, the government once distributed free bullocks and bags of paddy (as seed) in some villages along with cash to buy farm equipment. The Adivasis simply ate the bullocks and rice although the latter upset their stomach. The money was put away between wooden beams and thatched roof where termites had a field day. The Adivasi blamed outside interference for his suffering. But bureaucrats, seated far away and pushing supposedly well-meaning policies, had no clue to the reality on the ground.

Then came the Maoists, and they began to change the rules of the game, also supposedly for the Adivasi’s betterment. Armed with an imported ideology, Abujhmad soon became a “Liberated Zone”. The government retaliated. “With their purportedly enviable purpose, Maoists and other segments of civil society are as corrosive as those they claim to be reforming.” And along with corporate houses, media, judiciary, academia and judiciary, the Maoists implicitly marginalised the local ethos, practice and worldview.

The years of armed conflict have taken their toll in Bastar. Now many of its young migrate to other States in search of work – and sometimes get jailed for petty reasons. The Adivasi world is falling apart. The author speaks of a police officer who would routinely deprive Adivasis of the roosters they brought for selling in the ‘haat’; for reasons not clear to anyone, he was awarded the President’s gallantry medal! Such were the guardians of tribal welfare!

Much before the Maoists landed, Abujhmad was married to its own socialist principles. If a few went hunting, the fare was distributed equally amongst everyone in the village. No one begged – perhaps the only such place in India! Although all of Bastar now works, Abujhmad refuses to. Working for others is considered an affront to well-being and self-esteem. At times, the Adivasi would exchange tamarind with the outside world for salt. “There is a certain austerity to living, its persona, language and ways.”

The author, who has written extensively on tribals, is very clear: he does not want the larger world to emulate Abujhmad. But his sympathy lies with the Advisasis and their way of life, and he resents the manner the outside world decides what is good for them. “Abujjmad’s wilderness is a place of ‘static motion’ where the human and the wild converge in a non-secular web of myth, ritual, stories, fear, reverence and worship… That is Abujhmadia wisdom.”