Since then, amateur radio has become one of the most exciting and popular hobbies across the world with over 3 million hams worldwide. The United States and Japan have more than a third of the total ham population in the world while in India there are just 25,000 hams out of which around 2,000 are active, which does not augur well, when we consider our achievements in developing space technology.

Every country has an apex body of hams which is recognised by the Telecom authority of that country. Unfortunately the apex body of amateur radio in India is still not recognised. In the US, the ham exams are conducted by ARRL, a body of radio hams who volunteer as examiners and the licences are given by the Federal Communications Commission (FCC).

India still has to go a long way to have that kind of framework to issue ham operating licences. One of the greatest allures of amateur radio is that when the traditional modes of communication fail, the hams come to the rescue. Radio amateurs have played a crucial role in providing communication during earthquakes, floods and other calamities.

The early ham operators in the Indian sub-continent were British army officers and the native Indians were late entrants into the hobby. The first Indian to be licenced was Amarendra Chandra Gooptu in 1921 (call sign 2jk). Our former Prime Minister Rajiv Gandhi was an active ham who did his might in promoting the hobby.

Charu Hasan the famous character actor was a dedicated ham who used to keep in touch with his daughter who was a Doctor in Ireland, even our Tollywood hero Rajendra Prasad was also active on the ham bands for some time. 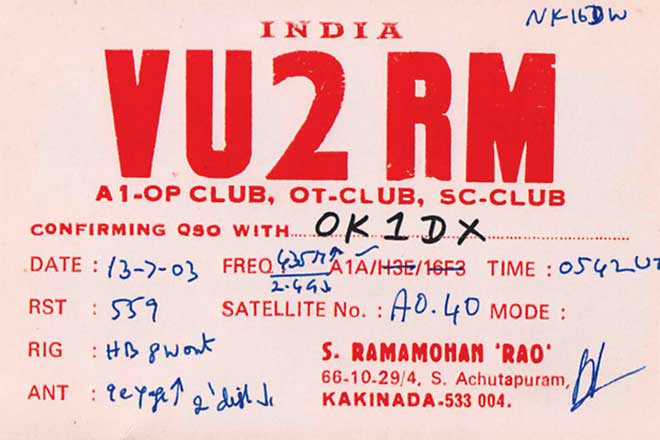 In the Telugu-speaking States, we had well known hams including NR Raju, who was wireless mechanic in the Royal Air Force during WW-II, who designed India’s first amateur solid state two-way long range HF radio which is still popular.

Sam Bhargava the younger brother of PM Bhargava, the noted scientist, was a keen ham who had a big HF station with a 100 feet crank up tower in Secunderabad.

Ham radio should be introduced in schools, engineering colleges on a large scale, it is a dying hobby in India while others are making big strides in this exciting hobby.

Qatar is launching a ham satellite, actually a ham transponder on a commercial satellite which will cover the entire Europe Asia and part of South America. We hope the concerned organisations in India, takes cue from them in promoting the hobby on this World Amateur Radio day.