It was dog’s day out when two-year-old Ludivine, a Bloodhound from Elkmont, Alabama, was let out by pet parents to pee but she ended up becoming a showstopper at a half-marathon. When Ludivine heard cheers near the farm she lives, she joined the runners at the starting point and took off with them. 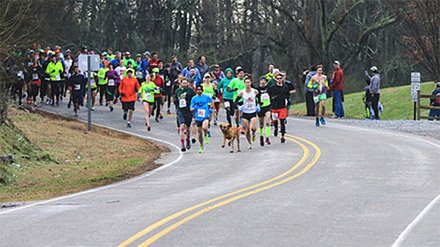 She assumed that they were playing with her and ran along with them. Chasing rabbits and cows and smelling flowers on the way, she took pauses while running. But the distractions couldn’t stop her and she completed the half-marathon at the seventh position.

After 1 hour, 32 minutes and 56 seconds when the organisers saw her finishing at the end track, they gave her a medal for her remarkable performance.

Interestingly, they were so impressed by the reaction of people on her participation that they decided to rename the event as “The Hound Dog Half” in her honour. More adorable photographs of the hound running alongside the marathoners can be seen by logging on to justsomething.co.