Hyderabad: To improve groundwater level and irrigation facilities, the Telangana government has been developing tanks under Mission Kakatiya. Under the initiative, now mini-tank bunds too are being developed to create the much-needed lung spaces in towns and cities.

The development of mini-tank bunds has been taken up in almost all towns and cities simultaneously, except Hyderabad — home to the mighty Tank Bund on Hussainsagar. While the government proposed to develop mini-tank bunds in 105 constituencies, tenders were called and finalised for 90 such facilities at a cost of Rs 319.51 crore. Till November 2019, about Rs 190 crore was spent on building these structures, and the works are going on at a brisk pace.

The tanks were originally built during Kakatiya regime or Asaf Jahi rule. With no proper care for decades, the tanks were silted, drastically reducing storage capacity. With the TRS government’s decision, they are now being rejuvenated and de-silted, while sewerage is being restricted. Tank bunds have been strengthened by protective walls, while walking tracks are built on mini-tank bunds in addition to landscaping. 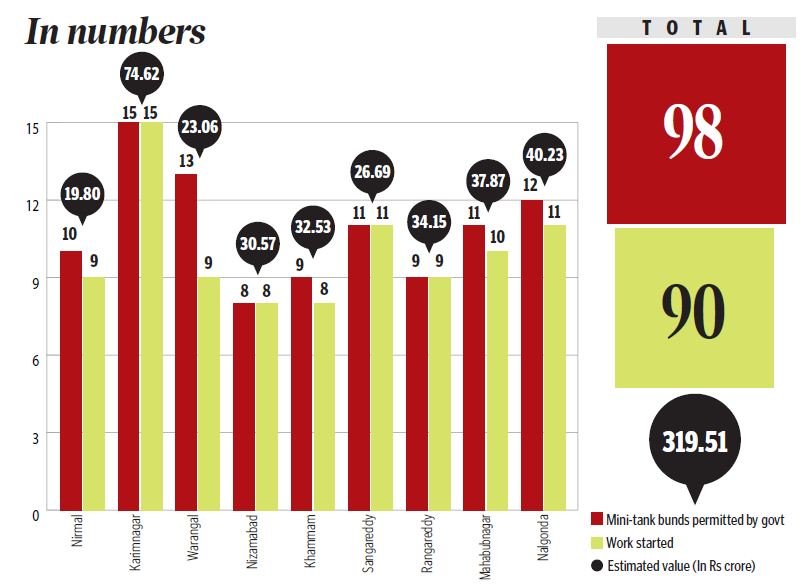 The development of the mini-tank bunds aids municipal authorities in not only fixing the boundary of water bodies but also restricting encroachments. While beautification, electrification and plantation on the borders create a pleasant atmosphere, small businesses and vendors find gainful employment near these mini tourist spots.

Work on these structures was almost completed in Mahabubnagar, Siddipet, Dubbak, Bhongir, Suryapet, Alair, Nalgonda, Dharmapuri, Manakondur, Sircilla, Korutla, Jagtial, Warangal, Dornakal and Khammam. While Karimnagar will have 15 mini-tank bunds, Warangal with 13 and Nalgonda with 12 come next on the list. Sangareddy and Mahabubnagar (11 each), Nirmal (10), Rangareddy and Khammam (9 each) and Nizamabad (8) were the other districts where the work has began. Almost 50% of the work has been done in other districts.