Hyderabad: The State government’s ambitious programme – Rythu Bhima, proved to be a source of ultimate support for farmers’ families who have lost their bread winners.

As many as 5,600 farmers who died in the recent months in the State received Rs 5 lakh each under the Rythu Bandhu scheme.

The programme is the brainchild of Chief Minister K Chandrashekhar Rao. He launched the scheme on August 14 to give financial support to the bereaved families that lost their bread winners. Under the scheme farmers under the age group of 18 to 59 years were eligible irrespective of land holdings. 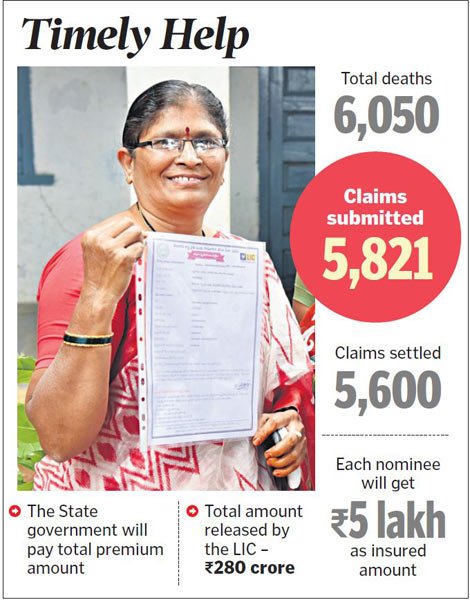 The State government will pay the entire premium amount on behalf of farmers for Rs 5 lakh insurance. Since the launch of the scheme, around 6,050 farmers died in the State. Out of this, around 5,821 farmer deaths were registered at the mandal agriculture offices across the State.

“The Life Insurance Corporation (LIC), the implementing agency had so far settled 5,600 claims. All claims were settled within a record 10 days period and insured amount was directly deposited into the accounts of the nominees,” said Agriculture Principal Secretary C Parthasarathi to Telangana Today, adding that 28.47 lakh farmers have been enrolled under the Rythu Bhima scheme and requested farmers to enroll their names in the scheme.

The scheme was intended to provide insurance to all the farmers irrespective of the size of holdings, but a few farmers are still not coming forward to enroll their names in the scheme. The LIC has so far paid Rs 280 crore as part of claims settlements and a case study by the agriculture department says that 90 per cent of total 5,821 farmers who got insurance amount are holding less than five acres of land and their bank account shows their account balances were less than Rs 500.

The Agriculture Principal Secretary recently held a review meeting with the department officials and also enquired about the rejections of application because of bank issues pertaining to nominee account and directed officials to hold special meeting with bankers and settle those issues and ensure the insurance amount was paid to nominees.

The department was also preparing budget estimation for the scheme for 2019-20 and brining awareness among the pattadars (land holders) too enroll their names in the scheme.